The RFC turns 30 next year. Many of our supporters have been with us for most, if not all, of the past three decades but I bet even some of them may not know about a small but vital grant program: our group grants. The RFC has awarded over $7 million in our history. Of that, significant amounts went to support prison visits, young activists targeted for their own organizing efforts and Gathering programs. 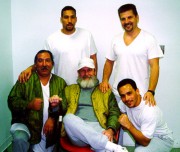