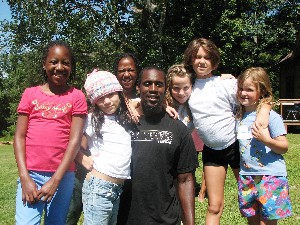 The RFC’s founder, Robert Meeropol, was six years old when his parents, Ethel and Julius Rosenberg, were executed at the height of the McCarthy Era after one of the most hotly debated trials in U.S. history. Robert and his brother survived their nightmare in large part because of the loving and culturally rich life that was created for them by their adoptive parents, and by the progressive community who rallied to raise a trust fund to help them.

Aided by this emotional and financial support, the brothers grew up in a creative milieu, among writers, musicians, actors and other artists. They attended schools and summer camps where the Arts were valued, and found solace and kinship in these environments. So when he launched the RFC, Robert knew firsthand that the educational and cultural activities paid for by RFC grants—for example, art classes or music lessons— could provide a safe harbor for children living through traumatic and unstable circumstances.

In addition to awarding regular grants, the RFC produces in-house programs called Gatherings. Held over 4-day periods in Western Massachusetts, Gatherings offer RFC beneficiary families and targeted activist youth an array of cultural workshops along with recreational and social activities. The programming facilitates the formation of bonds between Gathering participants and creates a space to share and connect with others in similar circumstances.

The most recent Gathering, held in August 2017, brought together twenty participants including three peer leaders (all former RFC beneficiaries) from across the country. Participants traveled to the gathering from seven different states.

Workshops and activities included writing, art, dance, drumming, an evening campfire, sports/adventure games, pool time, and a musical performance. Participants also had an opportunity to share their and their families' experiences with their peers in a “Tell Your Story” session.

The RFC has produced nine Gatherings; five of these community-building events were for RFC beneficiaries aged 18-24, and four have been for entire RFC beneficiary families (the activist parents and their school-age children). These events exemplify the RFC’s commitment to building community and combating the isolation that makes activist families vulnerable. Gatherings also reflect the RFC’s belief that children in difficult circumstances deserve to have fun, relax and experience some “normalcy.”

In addition to a generous leadership grant from the Fineshriber Family Foundation, special RFC grants helped support the costs of the 2017 and 2014 Gatherings.