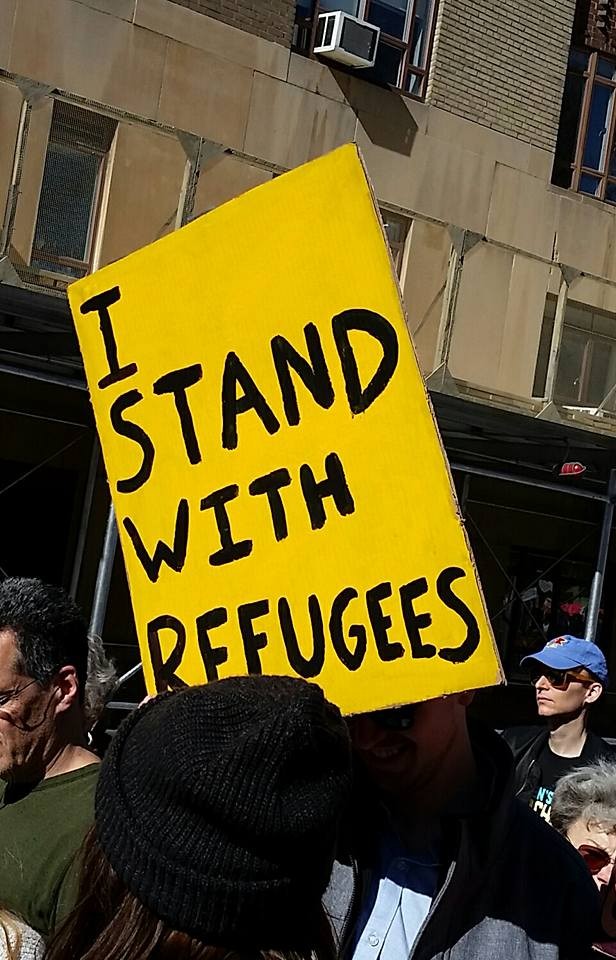 The overcrowded detention camps crammed with babies, youth and adults seeking asylum are horrifying, as are the reports of deaths, family separations and a lack of basic necessities like food, water, bathrooms or a safe place to sleep.

As a human being and a U.S. citizen I’m appalled by what the government is doing in all of our names. As the granddaughter of Ethel and Julius Rosenberg, and the daughter of their younger son Robert Meeropol, I also have a unique and deeply personal reaction to seeing children separated from parents, and those fighting for a better life for their families imprisoned and demonized. The circumstances are very different, but at the core the similarities resonate: once again, our government is using children as weapons in the battle for public opinion and denying the human rights of an entire group of people identified as a national threat in a time of mass hysteria. This is simply unacceptable.

Vigils and other actions protesting our government’s inhumane, unjust and ineffective immigration policies, and calling for an end to the detention camps, are planned around the country on July 12th. Many of these events are being organized by or are affiliated with the group Lights for Liberty. (Visit lightsforliberty.org for more information or to find a gathering near you.)

I support those working to close the camps, and I do so in appreciation of the people who fought against the separation my family endured. I’m also proud that the Rosenberg Fund for Children has joined dozens of other organizations listed as “sponsors” of Lights for Liberty.

The RFC stands in solidarity with and offers unique resources to immigrants’ rights activists who are being targeted by ICE because they’re speaking out against deportations and other anti-immigrant policies. We know movement organizers are being harassed, arrested, detained, deported, fired, injured and imprisoned for their participation in this struggle; we’re already helping some of them.

We denounce this politically motivated targeting and offer both emotional and practical support to targeted immigrants’ rights activists and their families in the U.S., regardless of their documentation status.  The RFC offers monetary grants (direct funding) for targeted activists under age 25, or targeted activists’ children who are 24 or younger. In some cases the grants can be up to several thousand dollars per recipient per year and are renewable.

I encourage any immigrants’ rights activist (under age 25 or with children under age 25) who has been detained or harassed for their organizing, to contact us on social media, at granting@rfc.org or 413-529-0063 to see if we can help. Or visit www.rfc.org/granting for more information.

My father founded the Rosenberg Fund for Children (the organization I now run) to honor the people who rallied around him and his brother, and to carry on their courage and compassion by helping children in the U.S. today whose parents face harassment, imprisonment or worse because of their progressive activism.

I think many people feel paralyzed by the enormity of the immigration crisis and wonder whether donating a little money to groups on the ground or making calls or attending demonstrations matters. I know from my work at the RFC and from my own family experience that seeing hundreds, thousands or millions of people acknowledge your pain and act to stop it makes a huge difference.

Many of us will be on the streets of our communities on July 12th, joining those already doing the vital work day in and day out, to protect immigrant children, adults and families. I believe our collective efforts will lift up those impacted by this human rights disaster.

Concentration Camps in the United States of America

This is absolutely unacceptable behavior from the government which supposedly represents me and my fellow citizens. I do not authorize this use of my taxes. It must end immediately.

Unlawful separation and incarceration of parents and children

A day is so long in the life of a child. As we all go about our daily tasks each and every day, children and their anguished parents have to exist in terrible, subhuman circumstances. This is torture, and torture sanctioned by our government. It has to stop.

Arrests and involuntary detention of individuals and families and unaccompanied children at United States borders are acts of state terrorism. Many of us in the United States are old enough to remember the Holocaust. What the United States government is doing is step one in creating another Holocaust. Whatever the nation's immigration policies are or may become, we cannot escape our individual responsibility for failing to act with ultimate determination to stop this nightmare.

Is it time yet to call this government a tyranny? If not why not?

this link on your blog does not work
To receive a notification whenever there is a new post to this blog, subscribe now.

Subscribing to our blog

The link leads to an RSS feed for our blog. As with any RSS feed subscription, you need to use an RSS reader ("feed reader") app of your choice to subscribe and receive the feed. (A quick Google search will explain what these apps do, and suggest many choices.) Sorry for any confusion.

my sister who grew up speaking Spanish and has had years in the peace corps and as administrator of non profit agencies will be working as a volunteer with the refugees in the el paso area for two weeks in late August. it is possible that my brother or I will be there as well tho we do not hable la lingua...

I am sending her links to this so that she can bring the information about the potential grants for young activist workers and the children of activists - I am ashamed to be American, I want to see Trump and the ice agents involved and, for that matter, all the Republicans in Congress who have been allowing these atrocities because of their party loyalty, to be indicted on criminal charges as soon as we can push them out of office... their crimes are numerous, they are felonious and they MUST BE PROSECUTED under Federal, State and International Law and according to the several treaties we have signed...

I loathe what the USA does to ruin lives and our planet...

It is disgusting to see what our government 'leaders' create-and-condone (both parties) in our 'national interest'.
'Leaders' are transforming the USA into THE huge swamp which is overflowing into so many other countries...
Our BrokenSystem must undergo a major renovation; it is beyond repair...