We Say NO to Restrictions on Protest in Our Nation’s Capital!

We Say NO to Restrictions on Protest in Our Nation’s Capital!
10.16.2018
protest dissent Donald Trump First Amendment free speech 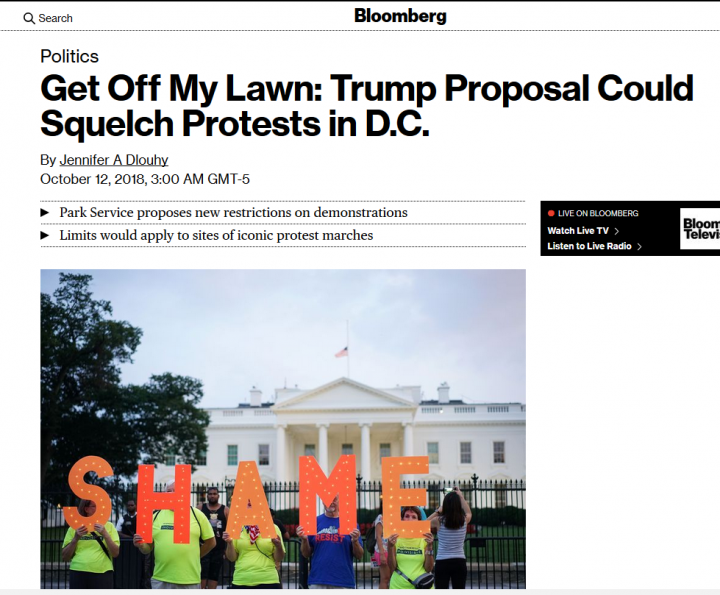 On October 15, 2018, Rosenberg Fund for Children executive director Jenn Meeropol joined nonprofit foundation leaders, editorial boards, and others, in voicing her adamant opposition to proposed changes to regulations that would severely restrict free speech, demonstrations, and special events on the National Mall and near the White House in Washington, DC.

The comment she submitted to the National Park Service stated:

“As the Executive Director of the Rosenberg Fund for Children (RFC), a public foundation which provides for the educational and emotional needs of children of targeted activists and targeted activist youth, I strongly oppose the revisions proposed by the National Park Service (NPS) to Title 36 of the Code of Federal Regulations, section 7.96 for the National Mall, President’s Park and other national parks in the Washington, D.C. area.

As many of my colleagues in the non-profit sector explained in a recent letter to the Secretary of the Interior, ‘Peaceful protest is a hallmark of our democracy and enshrined in the U.S. Constitution—that no matter our race, religion, gender, sexual orientation, age, socioeconomic status or political affiliation, all in America have the right to give public voice to our concerns, to weigh in on our government’s actions, and to support the ideals that are close to our hearts. To restrict or burden the public’s First Amendment right to protest in the nation’s capital is to directly undermine a core democratic and essential Constitutional value and a critical vehicle for public participation in our democracy.’

A number of the RFC’s grantees faced arrest, imprisonment, detention or harassment as a result of their lawful, peaceful protests addressing climate change and promoting racial justice, rights for immigrants, women and LGBTQ people, economic justice and health care for all, as well as other crucial issues. We fear the proposed change in regulations will worsen this problem.

I stand with my colleagues in the non-profit sector who urge you to not adopt these changes.”

This statement comes as the RFC is in the midst of reviewing dozens of applications for assistance from families of activists, and from youth activists, who have experienced extreme trauma and hardship as a result of voicing their opinions on urgent issues facing our nation and the world. And yet these courageous individuals remain committed to exercising their First Amendment rights, and we must protect and support them.

To restrict protest in the most publicly visible and symbolic places in our country is an affront to these principled activists and their families and the generations that have come before them, and is a flagrant and unacceptable attempt by the current administration to crush dissent.

We condemn these proposed National Park regulations and any other free speech restrictions or attacks on activists, in the strongest possible terms. And we stand with the children of resistance (the families of targeted activists and the targeted activist youth) and thank the RFC community that makes our solidarity tangible.