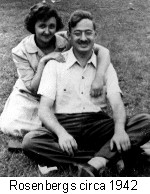 The Rosenberg Fund for Children was started by Robert Meeropol, who was orphaned at age six when his parents, Ethel and Julius Rosenberg, were executed at the height of the McCarthy Era.

In 1990 Robert figured out how he could repay the progressive community that helped him survive. He founded the RFC to help children of targeted activists in the U.S. today- children who are experiencing the same nightmare he and his brother endured as youngsters. In September 2013, Robert's daughter, Jennifer Meeropol, took over for him as the RFC's executive director.

Since its start, the RFC has awarded more than $7.5 million to benefit thousands of children in the U.S. whose parents have been targeted because of their involvement in progressive movements including the struggles to preserve civil liberties, wage peace, safeguard the environment, combat racism and homophobia, and organize on behalf of workers, prisoners, immigrants and others whose human rights are under threat.

Find out more about Our Story here.

Read the Rosenbergs' Last Letter to their sons here.

Learn about our Mission, Background, Funding Philosophy and Definitions here.