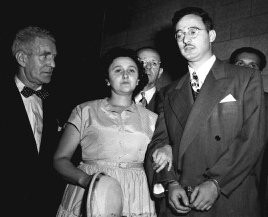 Ethel and Julius Rosenberg are shown in 1951, during their trial for espionage in New York City.

PROVIDENCE — “Julius Rosenberg was involved in something illegal — no one is claiming he was totally innocent — but he was not stealing atomic secrets.”

That was the view of Robert Meeropol in an interview Tuesday. His parents, Julius and Ethel Rosenberg, were executed in 1953 after being found guilty of espionage for passing information to the Soviet Union about the landmark U.S. effort to create nuclear weapons in World War II.

Now, there is a new documentary film that Meeropol said will shed some light on the case...(read more at the link below)