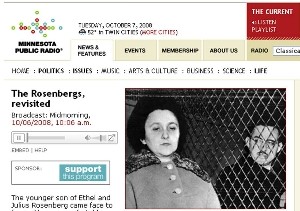 The younger son of Ethel and Julius Rosenberg came face to face with an uncomfortable revelation recently: that his father was guilty of spying for the Soviet Union. Both Ethel and Julius Rosenberg were executed for conspiracy to pass atomic secrets to the Soviets in 1953. And for most of his life Robert Meeropol believed his parents were not spies...(listen to the interview at the link below)