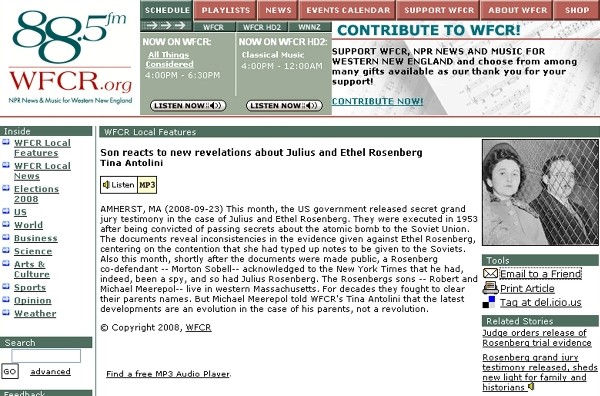 AMHERST, MA- For days, western Massachusetts residents Michael and Robert Meeropol have been wading through newly released secret-grand-jury testimony, and they've been thinking about their parents' last words to them -- "always remember we were innocent and could not wrong our conscience." Their parents were Julius and Ethel Rosenberg, who were convicted and executed in 1953 for passing atomic secrets to the soviet union... In addition to the unsealed court documents, other new information came out last week from Morton Sobell -- one of the Rosenberg's co-defendants and a close friend of the Meeropols. He acknowledged to the New York Times that he had been a spy, and implicated Julius Rosenberg as well. WFCR's Tina Antolini reports on what all of this means to the Mereepols and to history...(listen to the story at the link below)