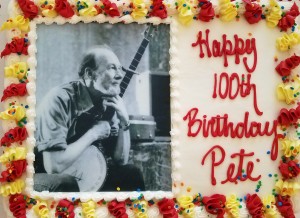 May 3, 2019, was the 100th anniversary of Pete Seeger’s birth. Pete was a beloved part of the RFC community, a generous founding member (with his wife Toshi) of our Advisory Board, and prior to that, a courageous supporter of Ethel and Julius Rosenberg.

To honor the centennial of this activist and folk music hero, we dug into our archives and also invited the public to share their memories and photos of Pete with us. We received hundreds of submissions including the sampling here, and compiled the recollections and images into a document you can view or download. In addition, you can find photos and stories on our Facebook or Instagram by searching for #PeteSeeger100.

“My father was a Communist indicted under the Smith Act, and spent 4-½ years underground. I was a child and was sent to Wyandot, a progressive summer camp, where Pete came for a sing-along. That's where I first learned the power of song (and Pete) to teach moral and political lessons. Later, I went to the Downtown Community School (a progressive private school), because of teacher harassment in public school. Pete was the music instructor who taught us songs and the joy of singing them together. He also invited my class up to his home for a day outing. He was at the school because he was blacklisted from many venues during the McCarthy era. I still have the handouts of many songs he taught us, collected in a manila folder with his banjo signature.” – John Norman

“A friend always remembers attending an outdoor concert where Pete was the headliner. With some time to kill, my friend went on a walk in the woods behind the stage, and there he bumped into Pete Seeger, who was happily engrossed in walking around, bagging trash he found in the woods. Always trying to leave things a little better...” – Joe Bryak

“In the summer of 2013, when my daughter was about to turn 17, she and her boyfriend and I went to The Hoot, a festival run by Mike and Ruthy Merenda, for whom Pete was a mentor. It was a wonderful weekend of music and community, but Pete’s performance was the highlight. Standing on the grass, tears in my eyes and grinning ear-to-ear, singing along to the music of my childhood with my daughter (who was old enough to understand the history Pete represented, and to remember the concert for the rest of her life) while realizing that given his age of 94, it might be the last time any of us would see him, was so meaningful and poignant.” – Amber Black (RFC Communications Director)

The RFC continued the celebration by hosting an intergenerational birthday party for Pete at our office, full of music, laughter and reminiscing. Guests had a chance to win weekend passes generously donated by the Clearwater Festival and watched videos of Pete and others performing his music from an RFC-curated YouTube playlist.

Attendees also viewed a display of photos, including a gorgeous, candid image of Pete taken in 1979 by fine art photographer and photojournalist Robert Floyd, sales of which benefit the RFC. (Get details here about purchasing framed or unframed copies of this limited edition print.)

Pete Seeger was always there for the Rosenberg/Meeropol family and the RFC. And perhaps the most remarkable thing about him, reflected in the outpouring of stories our community shared with us this spring, is that this was no exception. For the last 75 years, Pete was there for almost every progressive undertaking imaginable. There simply was no one else like him. 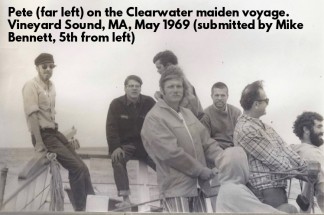 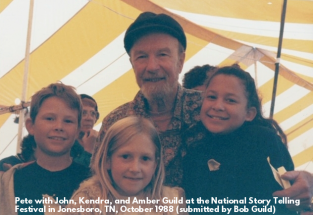 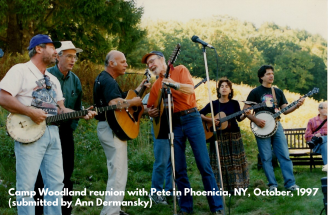 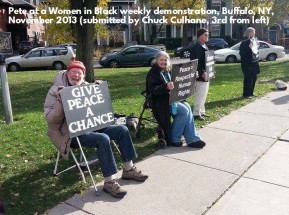 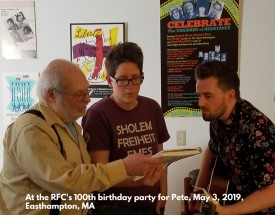