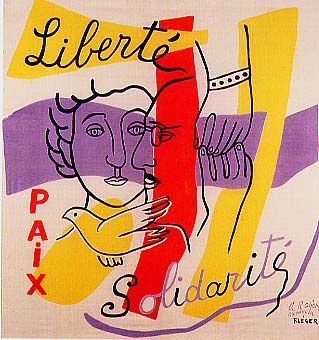 "French Cubist, Fernand Léger – a member of the Communist Party – designed a bold double portrait of the couple in his distinctive colourful style. The couple’s faces are shown overlapping, Ethel in frontal view and Julius in profile, alongside a peace dove – at the time also a common symbol of Communism. Two hands are shown with fingers entwined, a bracelet on one possibly a reference to a press photograph of the couple embracing in handcuffs during their trial. The images are framed by the words ‘Liberté, Paix, Solidarité’ (‘Liberty, Peace, Solidarity’).

Léger printed his design on silk scarves which he intended to sell to raise money for the Rosenberg’s defence. The couple were executed before he could put the plan into action – but one of the scarves now takes pride of place in the home of Robert Meeropol, the couple’s youngest son who was 6 years old when his parents died (his brother Michael was 10). Léger added the handwritten dedication to this scarf: ‘à Robert, orphelin’ (‘To Robert, orphan’)."