News from Our Community 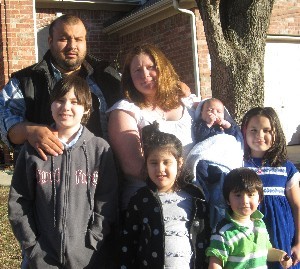 Many RFC beneficiaries and their families are living through heart-wrenching circumstances as the activist parents wage daunting struggles for social and environmental justice. However there are hopeful and inspiring stories from our community, too, of families reunited, and children finding joy and comfort from the creative activities and enrichment programs funded by RFC grants. (All names used here are -pseudonyms.)

Max’s mother was serving a 10-month sentence in a military prison when he was born last November. She had become morally opposed to the Iraq War while serving a tour of duty in 2006. After finding no other acceptable recourse, she refused to redeploy and — with her husband and children — sought refuge in Canada, where she became active in organized war resistance. The Canadian government rrefused to grant her asylum, however, and she was forced to return to the U.S. where she was court martialed and jailed — pregnant with Max at the time, and still nursing Garrett, his next oldest sibling.

The situation was extremely difficult for the entire family, both emotionally and financially, but RFC grants and other assistance enabled Max’s father to temporarily relocate with the children so they could be near their mom while she served out her time and awaited Max’s birth. Everyone in the family’s support network was thrilled when Max’s mom was released several weeks early and the family was finally reunited.

Three siblings, ranging in age from three to 11, are receiving RFC support for their participation in arts-related programs. Their parents are activists who have been repeatedly targeted for working to end war and ecological destruction. The family’s financial situation makes it very difficult for them to provide enrichment activities for the children. But RFC grants help pay for an arts-based preschool for Annalise, the youngest, and for music lessons for her two brothers, Tristan and Gabriel, who play violin and cello.

Tristan, the oldest, has especially thrived because of this assistance. He’s been a soloist with a professional orchestra and participated in international competitions. Tristan has also begun to use his musical talents to raise money for progressive causes including fair housing in New Orleans and efforts to end climate change.

Beginning this spring, a unique community center in a major U.S. city will be offering a special, therapeutic program to children from three refugee families. This center transforms the lives of individuals recovering from the complex consequences of torture by providing medical, mental health, and social services. The children from these families, who range in age from six to 14, all have fathers who were detained and tortured in their home countries for their pro-democracy activism, while the mothers fled into hiding with the children.

Now living in the U.S., the parents and children are experiencing myriad lasting effects from these traumas. RFC funding will allow the children to participate in an evening music program held several times a month at the center, while some of their parents take part in an international cooking class also held there. (We are unable to show photos of the children in this program as the families’ lives are still in turmoil.)