News from our Community

News from our Community

A spotlight for news about, and of interest to, our community

The RFC was thrilled to be back for a second year sponsoring Millpond.Live, the free, all-ages, grassroots music and art festival in our backyard in Easthampton, MA. The 2018 festival takes place on four consecutive Saturdays: Aug 25, Sep 1, Sep 8, Sep 15.

Take a 1-minute peek at the sights and sounds from this season, and learn more at Millpond.Live.

The Rosenberg Fund for Children was proud to sponsor the 2017 Millpond.Live festival and help bring socially conscious, activist artists Sophia Dawson, Climbing Poetree, Sweet Honey in the Rock, and Rebel Diaz, to our backyard in Easthampton, MA for a 6-week, free, art and music festival.

The campaign supporting Ethel Rosenberg's sons petition to (then) President Obama to exonerate their mother, was resoundingly successful at changing the narrative about her case and educating the public about the dangers of government overreach. Even though the president was not moved to act on the brothers' petition before leaving office, tens of thousands of people signed the petition calling for exoneration, and were introduced to the Rosenberg Fund for Children's work aiding activist families who are under attack in this country today.

Find major media stories about the exoneration campaign at rfc.org/recentpresscoverage and statements from high profile supporters of the effort here.

Filmed in the wake of groundbreaking new evidence indicating Ethel was not a spy and her execution was wrongful, CBS' 60 Minutes aired this in-depth story on October 16th, featuring interviews with Rosenberg sons Robert and Michael Meeropol and others. The story, which can be viewed here in its entirety, explores Ethel and Julius Rosenberg’s controversial trial and execution for the so-called “crime of the century.”

Also on the 60 Minutes website: this video extra with Anderson Cooper, and Robert and Michael Meeropol.

Two Honors Bestowed on Ethel Rosenberg in NYC on Her 100th Birthday, September  28, 2015

On September 28, 2015, the 100th anniversary of Ethel Rosenberg's birthday, she received two posthumous honors from New York City (where she lived her entire life, until being sent to Sing Sing Prison in Ossining, NY, where she was executed). In a ceremony on the steps of City Hall, New York City Council Members gathered with three generations of Ethel's descendants, to issue a stunning proclamation in her honor, noting among other things, that the "government wrongfully executed" her. In addition, Gale Brewer, the Manhattan Borough President, proclaimed it to be "Ethel Rosenberg Day of Justice in the Borough of Manhattan." Visit the the RFC Press Releases page and our social media for full text of the proclamations, statements from Rosenberg sons Robert and Michael Meeropol, and more.

New York City Council to Honor Ethel Rosenberg on September 28, 2015, the 100th Anniversary of Her Birth

After years of hard work by RFC Founder Robert Meeropol, and others, on Monday, September 28th, members of the New York City Council will issue a proclamation honoring Ethel Rosenberg, on what would be her 100th birthday. Robert, his daughter Jenn (current RFC executive director), and other members of the Meeropol/Rosenberg family, will be at the announcement at 11:00 am on the steps of City Hall in New York.

The ceremony is open to the public and members of the media. Please visit our Press Release page for further details, and to read the exact language of the proclamation once we are able to release it following the ceremony on Monday, September 28th.

As part of our 25th anniversary year's celebration of "Artists as Activists," the RFC is proud to have friends and allies among the  artists who in one week, have written and made videos with more than 80 verses of the new protest song, "Take Down Your Flag" written and first performed by singer songwriter, Peter Mulvey on June 19, 2015.

Ani DiFranco, Pamela Means, Melissa Ferrick, Mark Erelli, Erin McKeown, Anais Mitchell and dozens more artists around the country have already added their own verses, commemorating the victims of the Charleston shootings, and the broader community that's been affected.

And following the actions of artist and activist Bree Newsome, who on the morning of June 27, 2015 scaled the flagpole outside the SC statehouse and took down the Confederate Flag as an act of protest and was promptly arrested, at least several new versions - including one by Peter - have been added that salute her.

The "Take Down Your Flag" playlist on YouTube is being updated regularly.

The RFC has signed on proudly to sponsor Seeger Fest, five days of FREE Music - Dance - Film - Boat Rides - Photo Exhibit in NYC & the Hudson Valley in honor of Pete & Toshi Seeger, organized by their grandson Kitama Cahill-Jackson. July 17-21. Details including the line-up for concerts at Lincoln Center Out of Doors and Central Park's Summer Stage, plus information on all the other events of the festival, are at www.seegerfest.org. The Seeger Fest Facebook page also has frequent updates.

As news about the Heartbleed OpenSSL bug spreads, we want our supporters to know that the RFC site, including our online donation portal hosted by Network for Good, is not affected.

The RFC pays tribute to our dear friend and original Advisory Board member, Pete Seeger, upon learning of his passing. Memories from Jenn and Robert Meeropol here, and our video tribute below.

Join the RFC for the premiere of the 90-minute film version of the CARRY IT FORWARD event that starred Angela Davis, Eve Ensler, Robert, Jenn and Michael Meeropol, Mike + Ruthy, Rebel Diaz, and others, and commemorated the 60th annviersary of the executions of Ethel and Julius Rosenberg. Sunday, January 12, 2014, in Northampton, MA. Details at www.rfc.org/cif.01.12.14. 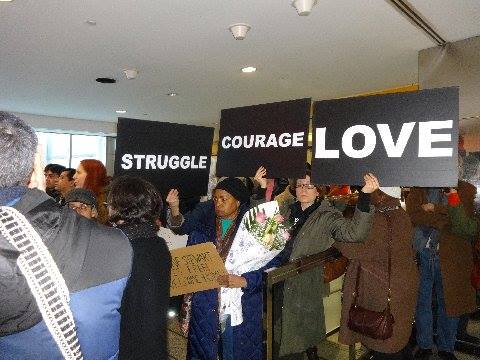 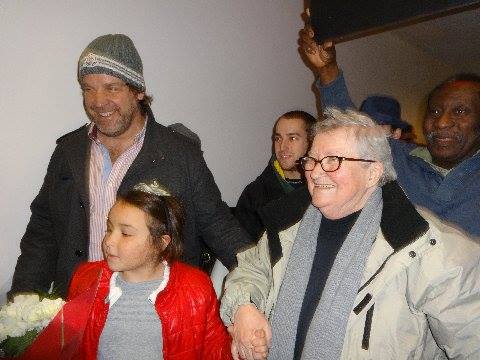 The Rosenberg Fund for Children has signed on as a sponsor of the 2013 National Convention of the re-constituted Students for a Democratic Society.  There are over 100 present chapters of this radical, multi-issue student and youth organization group working to build power in high schools, colleges, universities and communities around the country.

The convention will take place at Austin Peay  State University in Clarksville, Tennessee on October 11-13. The organizers have put together a power house line-up of speakers, workshops, and entertainment including our friends, Rebel Diaz, who will present "Hip-Hop and Immigration,"a workshop on the historic role of immigration, the criminalization of immigrants and youth of color, and Hip-Hop’s responsibility in defending immigrant rights. Rebel Diaz will also be performing and the event, and will be featured in a video clip from the RFC's CARRY IT FORWARD event that will be shown at the convention.

Amherst, MA area friends, please consider joining members of the RFC staff and Board, for a screening at 7:00 pm tonight of LONG DISTANCE REVOLUTIONARY: A Journey with Mumia Abu-Jamal, at Amherst Cinema.

The screening will be hosted by RFC Board and Hampshire College faculty member, Dr. Christopher Tinson, who also will lead a panel discussion after the film.

LONG DISTANCE REVOLUTIONARY focuses on Mumia Abu-Jamal's career as a prolific writer and journalist from the depths of prison.  The film chronicles his life and work as a journalist, writer, and philosopher - a public intellectual who has spent thirty years in a Pennsylvania prison, twenty-nine of them in solitary confinement on death row.  The film tracks Mumia's early work in journalism as a writer for the Black Panther newspaper (at age 15) through his promising and emerging career as a reporter for National Public Radio.

Rebel Diaz, the radical hip hop group who performed for the RFC in our CARRY IT FORWARD show in NYC in June, will be presenting a panel and concert at Hampshire College on Friday, September 28th. The brothers at the heart of this group are the children of Chilean radical leftists who became political prisoners and were tortured after the Pinochet coup. They'll be joined by their father and two of his Chilean compadres, (fellow activists and torture-survivors, and parents of a former RFC beneficiary), for a presentation about the Pinochet coup, which occurred on September 11, 1973.  They'll follow the talk with a performance of their radical brand of hip hop.

On September 11, 1973, Chilean armed forces, aided by the CIA, killed the democratically elected President Salvador Allende, and instituted a brutal dictatorship. Survivors of Pinochet's dictatorship and second generation Chilean political exiles share testimonies and discuss the struggle for human rights in Chile and beyond.

9/11 is a date of national tragedy not only for the U.S. but for Chile, too. 40 years ago, the Allende government was ousted in a violent coup. Under the Pinochet dictatorship that followed, leftists were arrested, tortured, and murdered. The parents of 2 of the members of Rebel Diaz were among those tortured in concentration camps, along with the parents of a former RFC beneficiary (who are pictured above with their daughter and members of Rebel Diaz, and saluted in the intro of the video below). Rebel Diaz performed this song in our CARRY IT FORWARD show in June, as a tribute, telling the audience that 40 years later, those children of rebellion have grown up, and they are carrying on the struggle for a more just world.

The Summer/Fall 2013 newsletter reports on the June 2013 CARRY IT FORWARD program starring Angela Davis, Eve Ensler and others (including providing video of the full show and event photos); contains Jenn Meeropol's first message to the RFC community as Executive Director; describes changes and new additions to our Staff, Advisory Board, and Board of Directors; details Spring 2013 grants, and more.

As of September 1, 2013, RFC founder, Robert Meeropol, has retired from the Executive Director position and his daughter Jenn Meeropol has stepped into that position.  This article in The Boston Globe describes this important transition.

Robert Meeropol feels a kinship with Bradley Manning, and explains why on the RFC blog, as Manning awaits sentencing.