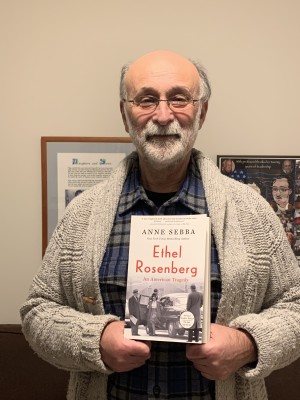 We’re eagerly anticipating St. Martin’s Press’s June publication of New York Times best-selling author, Anne Sebba’s, newest book, Ethel Rosenberg: An American Tragedy. RFC Founder Robert Meeropol read Anne’s previous books after she asked him and his brother if they would share their memories and expertise with her.  Robert shares, “I was attracted to Anne’s feminist perspective since I have long felt that my mother was an unsung feminist heroine. Having just finished reading an advanced copy of the new biography, I am gratified that someone has finally done my mother’s life justice.”

Anne makes clear in her acknowledgements that this was an independent, rather than authorized, biography.  “My gratitude extends first of all to Ethel’s two sons, Michael and Robert Meeropol, who, while never imposing on me their interpretation of their mother’s story, were, in addition to being witnesses as well as experts on the story, always ready to answer my questions and accept that there was not always only one way to interpret character.”

Acclaimed British biographer, Claire Tomalin, whose powerful memoir, A Life of My Own, landed on the New York Times best-seller list, praised Anne’s work; “I was completely held, absorbed and involved with the story.  Brilliant…could not be bettered.”

On her website, Sebba teased her new book, “Living in isolation helped me a little in my understanding of the tragedy which befell Ethel. But, as the great giant of biography Richard Holmes wrote, self identification with one’s subject is the first crime of the biographer. I shan’t reveal anything more now but I hope eventually to be telling the story of an era through the story of [this] woman.”

You can pre-order a copy of Ethel Rosenberg: An American Tragedy (and support your local independent bookstore) here.