Follow the Strange Fruit & Rosenberg Mentions of the Day 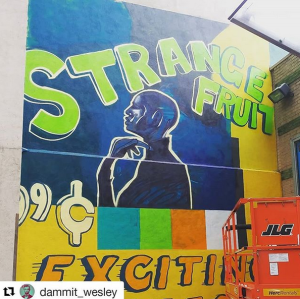 If you follow us on Facebook, Instagram or Twitter, we invite you to look for the Strange Fruit and Rosenberg Mentions of the Day (#StrangeFruitMOTD and #RosenbergMOTD). This effort we launched recently, spotlights two topics that consistently engage our supporters more than any others: the case of Julius and Ethel Rosenberg and the anti-lynching anthem “Strange Fruit.”

“Strange Fruit” was written more than 80 years ago by Abel Meeropol, who with his wife Anne, adopted the Rosenbergs’ orphaned sons (the younger of whom founded the RFC). Since then it’s evolved to become a potent shorthand not just for Jim Crow era lynchings, but for present day police killings of African Americans, mass incarceration and the death penalty.

The words and themes from the iconic song appear constantly in works of theater, dance, painting, sculpture and other genres. They’ve been incorporated into academic studies of health and mortality, and into unlikely (and sometimes ill-advised) vehicles such as a themed cocktail menu. Every day, in places as far flung as Australia and India, “Strange Fruit” is referenced in reviews of musical performances and in essays about cultural history. In 2019, it’s a ubiquitous and devastating metaphor for personal, societal and institutional racism.

Similarly, just as this country’s current manifestations of racism resemble the past, so, too, are we experiencing undeniable echoes of the Cold War Red Scare days.

Even before Donald Trump’s political career, the Rosenberg case was the subject of novels, plays, operas, comic books, and dance pieces among other creative works, not to mention books and articles that examine the legal and historical aspects of the case. But since Trump’s rise to power, the frequency of Rosenberg references has exploded.

Hardly a day passes when Ethel and Julius aren’t written or talked about, often in relation to the notorious attorney Roy Cohn. Cohn – the member of the prosecution team who engineered false testimony against the Rosenbergs and was especially culpable in Ethel’s wrongful conviction and execution – not only went on to aid McCarthy and Nixon at other points in his morally bankrupt career, but also was an influential mentor and lawyer to a young Donald Trump.

The Trump-Rosenberg references are only likely to increase with several documentaries about Roy Cohn in the works, including one by Rosenberg granddaughter Ivy Meeropol (cousin of current RFC Executive Director Jenn Meeropol.) And with constant examples surrounding us of the persistence of individual and systemic racism, references to “Strange Fruit” are sure to remain frequent as well.

[The image included with this article is a photo of a portion of the mural that artists Dammit Wesley contributed to the 2018 "Talking Walls Mural Festival" in Charlotte, NC.]

Member of Students for a Democratic Society (SDS)