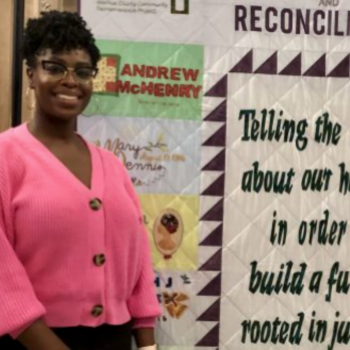 This Strange Fruit Mention of the Day highlights Activist Artists using “the live play format [to allow] audience members to see themselves in the characters and understand the depth of the commitment necessary for reconciliation.”:

"On August 18, 1916, five Black community members were lynched in Newberry before a mob who jeered and cheered... The six who were lynched came to be known as the Newberry Six.

Over the weekend, NEW BERRY, a play directed by UF professor Ryan Hope Travis, broke a long-standing silence surrounding the tragedy — not by re-enacting it, but rather celebrating the lives that were lost.

The play’s name is a new spin on famed jazz singer Billie Holiday’s 1939 song about the lynching: ‘Southern trees bear a strange fruit…Black bodies swinging in the Southern breeze.’

‘From ‘strange fruit’ to new berries,’ said E. Stanley Richardson, Alachua County poet laureate and actor who collaborated on the writing of the play and acted in it. Richardson explained that from the tragedy, hope could still bloom. As if symbolic of that, the play was produced by the Hippodrome Theater, which operates out of a historic downtown building that was once the Gainesville courthouse where Boisy Long was sentenced by an all-white jury to hang outside its doors.”

Read more about the play and view the trailer at https://www.wuft.org/news/2021/11/10/new-berry-a-play-based-on-the-newb…