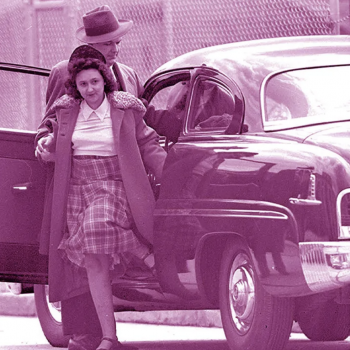 Rosenberg Mention of the Day, courtesy of an excellent review of Anne Sebba’s biography of Ethel (we especially appreciate the reviewers conclusion re: Anne & Abel Meeropol):

British journalist and biographer Anne Sebba’s new and terrifically researched 'Ethel Rosenberg: An American Tragedy,' the first biography of Ethel to appear in several decades, uses previously unavailable materials to help shed light on the case and the lives behind it.

[Ethel’s birth] family’s toxicity feels like a fitting reflection of the nation’s moral shortcomings, when anti-communist hysteria was at its height. But the miscarriage of justice was not only the responsibility of the nation’s Joseph McCarthys and Roy Cohns. Figures such as President Harry Truman, President Dwight Eisenhower and Eleanor Roosevelt had opportunities to slow the gears and chose not to.

Perhaps the saddest dimension to the tale is another family story — the orphaning of the Rosenbergs’ young sons, Michael and Robert. Fortunately, teachers Anne and Abel Meeropol, who are among the few figures in this tale who come off as extraordinarily good people, offered the children a safe and supportive adoptive home.”