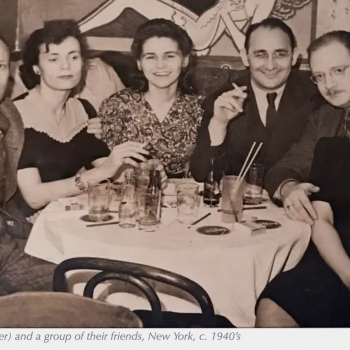 Rosenberg Mention of the Day: A review of Anne Sebba’s biography by Martha Sonnenberg that “must, of necessity, begin with a personal note..."

"When I was 13 years old, my mother took, from the deep recesses of her chest of drawers, a copy of The Death House Letters of Ethel and Julius Rosenberg:

"(1) We sat down together on our sofa, and we went through the letters. She told me how the Rosenbergs had been executed, by electric chair, in 1953, being accused of giving secret information to Russia.

"(2) She told me about McCarthyism, and especially about Roy Cohn, then a young assistant prosecutor who hounded the Rosenbergs with ruthless, malicious, and unsubstantiated accusations. She told me about the betrayal of Ethel Rosenberg by her own brother, David Greenglass.

"(3) We looked at the photos of the two young boys, Michael who was three years older than me, and Robby who was one year younger. She told me that she and my father had even considered adopting the boys, but decided against doing so after the FBI visited them in 1953. This FBI visit had no consequences other than to strike terror in their hearts, but for a year or so after that, I harbored a fear that my own parents would be executed.”

From there, Sonnenberg focuses on how, “Sebba restores agency and independent identity to Ethel Rosenberg, not as a martyr, but as a complex woman who made her own choices. She does this by looking at Ethel from four perspectives: as an artist, as a woman, as a Jewish woman, and as a communist woman.”