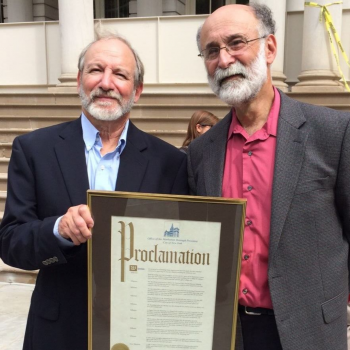 #OnThisDay in 2015, "Ethel Rosenberg Day of Justice in the Borough of Manhattan" was declared on Sep 28, Ethel's 100th birthday. In honor of this momentous day, we share some of the powerful remarks from the Proclamation gathering back in 2015:

▪️ "...I, Gale A. Brewer, do hereby recognize the injustice suffered by Ethel Rosenberg and her family, and on the occasion of her 100th birthday on Monday, September 28th, 2015, proclaim 'Ethel Rosenberg Day of Justice in the Borough of Manhattan.'" - Manhattan Borough President Gale. A. Brewer

▪️ "Ethel Rosenberg was wrongfully executed in 1953 which resulted in her two young children becoming orphans. Although nothing can erase this terrible loss of life, I am pleased to join my colleagues in the Council in posthumously acknowledging Ms. Rosenberg on the occasion of the 100th anniversary of her birth. It is my hope that this tribute will restore some dignity to the memory of this much-maligned New Yorker and her family." - NYC Council Member Daniel Dromm (D-Jackson Heights, Elmhurst)

▪️ "...To have so many Council Members of my parents' hometown - my hometown, my brother's hometown - acknowledge our mother's achievements and note that she was wrongfully executed is a dream come true. Today, a major elected institution of this great city and Manhattan's borough President have taken important steps towards acknowledging a terrible injustice. Next, it is time for the Federal Government to step up to do the same." -Robert Meeropol (younger son of Ethel & Julius Rosenberg)

▪️ "Let me echo Rob’s thanks to the members of the City Council, the Manhattan Borough President and the Public Advocate for recognizing the injustice that was done to our mother and, as a result, to her entire family. We also want to make it clear that the unjust prosecution and execution of our mother damaged our country as well. . .We believe that the issuance of these proclamations implicitly calls upon the federal government to take corrective action. . .to acknowledge the injustice done to Ethel Rosenberg back in 1953 as a way of learning from our past in the hope that similar injustices will be avoided in the future."- excerpt of statement of Michael Meeropol, (elder son of Ethel and Julius Rosenberg)