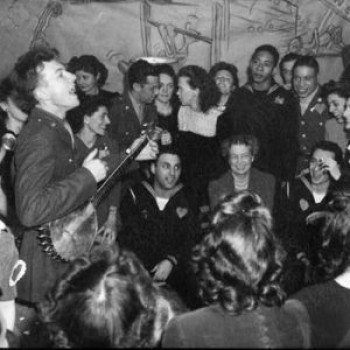 Artists as Activists Mention of the Day: In his fascinating review of Aaron Leonard's new book, The Folk Singers and the Bureau: The FBI, the Folk Artists and the Suppression of the Communist Party, USA—1939–1956, Mat Callahan explores the targeting of political organizers (including Ethel & Julius Rosenberg) and artists (including Billie Holiday & her performance of "Strange Fruit") and the contradiction inherent in this repression of activist artists.

"This is how U.S. Folk music (note the capital F) came into existence and why it was perceived as a threat by the very forces that needed music to create the nation of their dreams. Folksingers became the target of federal investigations, and folk music, as such, was indicted as the vehicle of communist propaganda. After all, singing 'The Midnight Special' might mean you were a dupe, if not a conscious agent, of Moscow!"