Celebrate the Children of Resistance

Celebrate the Children of Resistance
Image 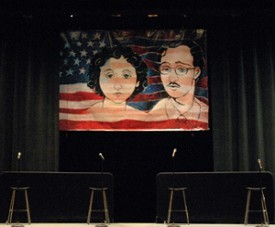 CELEBRATE THE CHILDREN OF RESISTANCE was a dramatic program presented by the RFC between 1997-2007, with minor updates for each performance. These events honored the progressive legacy that Ethel and Julius Rosenberg left to their sons while celebrating the courage of current activists. (This program was revised significantly in 2013, retitled CARRY IT FORWARD: Celebrate the Children of Resistance, and presented to mark the 60th anniversary of the Rosenbergs' executions. Visit the CARRY IT FORWARD page for details about the 2013 event.)

See videos by watching the Celebrate the Children of Resistance playlist here.

CELEBRATE dramatized the Rosenbergs’ personal story, the genesis of the RFC, and accounts of children and families receiving RFC grants. It was a testament to the power of family bonds, the value of a supportive community, and the ability to turn even the harshest repression into something positive.

Scripted dramatic readings of actual letters from targeted activists across the generations- from the Rosenbergs to RFC beneficiary families of today- formed the basis of the program. The letters were interspersed with music and poetry in events that embraced the history of progressive struggle and inspired a commitment to social justice.

About the creation of CELEBRATE THE CHILDREN OF RESISTANCE

I met Robby Meeropol when I was 19 years old. The first year we lived together, I read his parents' death house correspondence on my lunch hour at work, then went home at night and compared Robby's raccoon eyes with the photographs of the five-year-old visiting Sing Sing. Since then I've reread the letters many times; I've always loved best the ones Ethel and Julius wrote about and to their boys.

When we started the Rosenberg Fund for Children, I read the applications from activist parents on behalf of their children. They asked for help for day care, for summer camp, for piano lessons or family therapy or art classes. It struck me how similar the parents' words were to Ethel and Julius’ writings, even though they were separated in time by almost half a century. Even in the midst of intense political repression, parents still try their best to keep their family together, to take care of their children.

In 1996, the RFC Board started thinking about creating a dramatic program to tell our story. We wanted to honor Ethel and Julius' legacy from the past, to celebrate the courage of families who continue to resist today, and to express our hopes for the future. We wanted to use the words of those families and tie those words together with the music and the poetry inspired by the movements for social change around the world. We wanted to embrace Ethel and Julius’ words, and Michael and Robby’s legacy in the context of today’s struggles, today’s children.

I wrote CELEBRATE THE CHILDREN OF RESISTANCE with help from Robby and our friend Martín Espada. Material for the script was compiled from The Rosenberg Letters edited by Michael Meeropol, We Are Your Sons by Robert and Michael Meeropol, and We Remember the Rosenbergs, edited by Katherine James, and from the files of the Rosenberg Fund for Children. The 2007 performance incorporated material from the play Family Values by Ray Luc Levasseur.

CELEBRATE THE CHILDREN OF RESISTANCE grew out of the pain of having an execution in the family, and the enormous courage of our beneficiaries. It brings us together as a community of people who work passionately for social justice and support the families who are harmed in that work.