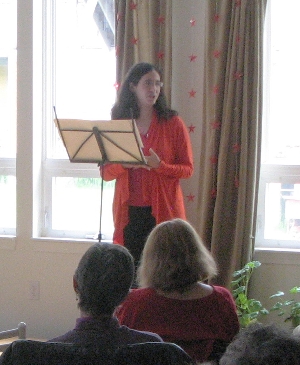 RFC executive director Jenn Meeropol is available to speak at conferences, universities, community centers, private receptions, and other venues across the country. All speaking fees are donated to the Rosenberg Fund for Children, a non-profit 501(c)(3) corporation.

Presentations include ample time for questions from the audience. In conjunction with larger events, Jenn is also pleased to visit classrooms or meet with small groups in more informal settings.

To schedule a presentation by Jenn Meeropol please contact Rachel Harb at the Rosenberg Fund for Children: rachel@rfc.org or (413) 529-0063 x 203.

Building a Community of Resistance: Protecting Young Activists and the Children of Activists

Jenn Meeropol, the granddaughter of Ethel and Julius Rosenberg and executive director of the Rosenberg Fund for Children (RFC), discusses the unique types of support the RFC provides to activist youth who have faced repression as a result of organizing for progressive values, and to children whose activist parents have been targeted for the same.

She highlights the kinds of attacks young activists and activist parents are facing in the U.S. today, and the resources the RFC provides to aid and protect them.

Jenn illustrates that just as was the case for her own family in the darkest days of 1950’s McCarthyism – when a worldwide community of support rallied to try to save her grandparents and to protect her father and uncle when they were orphaned as young boys after the Rosenbergs’ executions – so does the RFC “family” shelter targeted young activists and the children of activists today, and celebrate the courage they show by their resistance.

Were she still living, Jenn Meeropol's grandmother, Ethel Rosenberg, would have turned 100 on September 28, 2015. More than one hundred years after her birth and more then 60 years after her execution, what does Ethel mean to us today? What lessons can we draw from her life and death? Jenn explores how the popular press, prosecutors, the defense, supporters, leading political figures, films, and the highly charged political and cultural climate “framed” how people perceived Ethel then and now and what this means for today’s targeted activists and their families.

CARRY IT FORWARD: Celebrate the Children of Resistance

This 90-minute film stars Angela Davis, Eve Ensler and Cotter Smith (as Ethel and Julius Rosenberg), Rebel Diaz, Mike + Ruthy, Martín Espada, members of the Rosenberg/Meeropol family, and other artists and activists. It captures the theatrical production staged in June 2013 on the 60th anniversary of the execution of Ethel and Julius Rosenberg, that dramatizes the last four days of the couple's lives through readings of the Rosenbergs' prison letters and their sons' firsthand accounts.

The production also uses poetry, music, and acted vignettes to tell stories of present-day activist families the Rosenberg Fund for Children assists, while it highlights current movements for peace, environmental preservation, immigrants' rights, civil liberties and other progressive struggles from Idle No More and Stop, Stop and Frisk, to the fight to free political prisoners.

Get Up, Stand Up! Building a Creative Community of Resistance to Protect Young Activists and the Children of Activists

This presentation incorporates an 18-minute video featuring Angela Davis, Rebel Diaz, Mike + Ruthy, Jenn Meeropol and others. The short film dramatizes how activists from different movements and through the generations have been targeted, and celebrates the community built by the Rosenberg Fund for Children (RFC) to protect them and their families.

In conjunction with the film, Jenn talks about the aid the RFC provides – including supporting its grantees’ participation in the performing arts and other creative activities – and how the Fund is building a protective community to shelter future generations of young activists and the children of activists.

Jenn is the granddaughter of Ethel and Julius Rosenberg, U.S. political prisoners who were executed in 1953, when her father Robert was just six years old. Later Robert started the RFC, which helps activist youth who have faced repression for their organizing, and kids whose activist parents have been targeted.

The RFC has helped the families of Mumia Abu-Jamal, Russell Shoatz, Herman Bell, Tito Kayak, Leonard Peltier, Lynne Stewart and hundreds of other targeted activists and political prisoners, and youth working for immigrants’ rights, against police brutality and the U.S. military machine, and other struggles.