Recently, I’ve seen several Op Ed pieces and letters to the editor by teachers expressing dismay at the extent of the hostility that has been directed at them during the course of the current debate over “reforming” public education. While I share their concern that a lot of these attacks appear unwarranted and camouflage a right-wing agenda to gut public education and destroy teachers’ unions, I am even more concerned that the teaching profession is far from the only one that has come in for such vilification.

Think about it. The conventional wisdom appears to have a negative stereotype of just about every profession. “Incompetent” teachers join arrogant doctors, sleazy lawyers, ditsy nurses, dull accountants, money grubbing stock brokers, dirty cops, apish construction workers, obnoxious sales people, hick farmers, spoiled brat performers, crooked politicians, and on and on…. While every profession has its share of unpleasant characters, the overall thrust of this pigeonholing is both inaccurate and destructive. And its prevalence in modern-day America is no accident.

Such misanthropic generalizations serve capitalism very well. If everyone is a self-serving bastard, or a lazy incompetent, then why not climb over all the bums you can on your way to the top? If we are all in competition with each other, and virtually no one is worthy, then nothing is wrong with a social organization that in effect says “the devil take the hindmost.”

A society in which so many people are angry at so many others is a corporate CEO’s dream come true. If the workers are all squabbling amongst themselves, and if average people have nothing but disdain for each other, they are much less likely to utilize their greatest asset, their collective strength, to protect their interests. All of these derogatory characterizations, so many of them constantly stoked by the corporate controlled mass-media, alienate people from each other, and increase the likelihood that more people will live their lives as isolated competitors gaining satisfaction mainly from consuming as much as possible.

Such disapproving views of our fellow human beings also feed religious fundamentalist mindsets. This worldview posits that humans are hardwired for brutish animal selfishness that must be constrained by a myriad of universally applied rules in order to prevent us from ripping each other apart and drowning in a cesspool of sin. These folks see evil in much that is different, and that also serves to keep all but the chosen few at arms length.

We must look beyond these mass-media myths. For instance, despite anti-teacher propaganda, recent public opinion polls in Wisconsin indicate local residents have overwhelmingly favorable feelings about their state’s public school teachers. In fact, so far 2011 has brought us incredibly powerful proof of how much good can be accomplished by collective action.

From Cairo to Madison we’ve seen decent people shedding their differences and working for their mutual benefit. We’ve witnessed an unprecedented explosion of selflessness, by people from a broad range of professions. Rather than putting people down, I feel like crowing about the laudatory behavior millions across the globe are demonstrating. 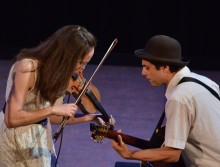