I concluded my blog last week, "Surprise Ending," with an overview of how I would have summarized my parents’ case prior to reading Walter and Miriam’s Schneir’s new book Final Verdict, and promised in my next blog to report on how the new book altered my beliefs. I also reviewed the two key events that led to my parents’ conviction and execution:

1. The Greenglasses swore that David provided a sketch and accompanying notes explaining the sketch to Julius Rosenberg in New York City in September 1945, and that Ethel was present and typed up David’s notes. The prosecution called this “the secret of the atomic bomb.”

2. The June 3, 1945 meeting between David and Ruth Greenglass and spy courier Harry Gold in Albuquerque, during which all the parties agreed Gold had used the code phrase, “I come from Julius.” I neglected, but also should have mentioned, that the three witnesses concurred that at that meeting Gold presented half of a Jello box top, which the Greeneglasses matched to their half. The Greenglasses testified my father had cut a whole box top and given half to Ruth months earlier. This was the only connection between Gold and my father, and implicated Julius in arranging this meeting where a set of sketches related to the triggering device for the atomic bomb were exchanged for a payment.

This is virtually all the evidence implicating Julius and Ethel Rosenberg in atomic espionage that was presented at the trial. Prior to the publication of Final Verdict, I knew from the FBI files that Gold and Greenglass had substituted the name “Julius” for the names “Dave” or “Ben” at a meeting arranged by the FBI while they were in prison awaiting trial. I knew the Jello box presented at trial proved nothing because the only Jello box introduced into evidence was cut by David in the court room as a demonstration model. I also suspected the September 1945 meeting was invented by David and Ruth. Final Verdict sheds new light on all of this.

In 1997 my brother and Walter Schneir discussed the new book, Bombshell, which had just been published. The authors, Albright and Kunstel, were focused on the actions of Theodore Alvin Hall, the youngest atomic scientist, but they also addressed the Rosenberg case. While reading the book Walter realized that Albright and Kunstel had discovered that the original spy reports on atomic espionage from the 1940’s still existed in the Russian Ministry of Atomic Energy. The authors referred to “document 464” and commented “This one corresponds to what Greenglass confessed he handed to Julius Rosenberg in September 1945.”

My brother was concerned that if the KGB really had a sketch from David, then our previous belief that David and Ruth had made up their atomic spying under government pressure was false. My brother had obtained from the authors an “inventory” of each document’s contents and shared it with Walter. From this Walter discerned that the sketch described in document 464 contained the same telltale errors as the sketch David presented at my parents’ trial.

David had testified he drew the second sketch from memory in his cell shortly before the trial took place. Could David really have been an atomic spy? And if our father put him up to it could our father have been one as well, even though so much else in the known record of the case made this unlikely?

Walter, in the meantime, went off on another tangent without telling us. He realized the KGB files appeared to cover three sets of incidents relating to atomic espionage. The first two involved Hall and German born atomic scientist Klaus Fuchs. Information provided by Hall and Fuchs was transmitted to the Soviet Union within a week, but the third - document 464 - did not arrive in Moscow until December 27, 1945. This date confounded Walter. He could not figure out why there should have been a three-month gap between the September meeting and December delivery. The answer, once he found it, shocked him.

Walter was stymied for years.  But after carefully reviewing what the authors of another book, The Haunted Wood, reported the KGB files recorded about atomic espionage, he finally pieced together what actually happened.

In January 1945, the FBI discovered that Julius Rosenberg, who had been working for the Army Signal Corp of Engineers was a member of the Communist Party. As a result, in early February he was fired from that government job. As reported in The Haunted Wood, a KGB file dated February 23, 1945 stated: “The latest events with [Julius Rosenberg], his having been fired, are highly serious…” The KGB memo concluded that the FBI had probably discovered Julius’ work for the Soviets.  In response, the KGB immediately terminated Julius Rosenbergs’ career as an active agent and had all his contacts turned over to others.

In Walter’s words, my father was given a pink slip by the KGB in February 1945. Therefore, the supposed September 1945 espionage meeting described above between the Rosenbergs and Greenglass could not have taken place because my father was no longer actively working for the KGB when the meeting was supposed to have occurred.

Instead, Walter discovered that the Greenglasses, ON THEIR OWN, without the Rosenberg’s involvement, met with Soviet agents on December 21, 1945 and delivered the sketch the government called “the secret of the atomic bomb.” That’s why the Greenglass sketch was not delivered to the Soviet Union until December 27th of that year!

I’ll discuss the impact of this startling new information on the phrase “I come from Julius” and the Jello box top in my next blog.

This is wonderful astounding news. Is there a statute of limitations on wrongful death suits against the US government?
If not, the Meeropol brothers should be able to sue for compensation.....big time.

Of course you can never be compensated. But like the 3d generation Japanese-Americans who won their suit to vindicate their parents who had been criminally rounded up into virtual concentration camps by the US government during World War II, there is ample reason to bring this case.
And like those Japanese-Americans, you can give the funds to charity--like the Rosenberg Fund for Justice.
Carolyn (Oppenheim)

I agree with the comment of 10/12/10. Compensation would be wonderful BUT the main objective - clear the name of the Rosenbergs, especially Ethel. Also I keep reading Julius and Ethel were found guilty and executed for passing secret information ... Wasn't the charge actually CONSPIRACY to commit . . .? And for this they were murdered????? For conspiracy to commit - are you kidding me. This country owes an apology to the children and grandchildren of Ethel and Julius - and a clearing of their name. At the least. 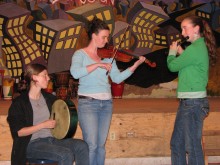