On the 68th anniversary of my grandparents' executions 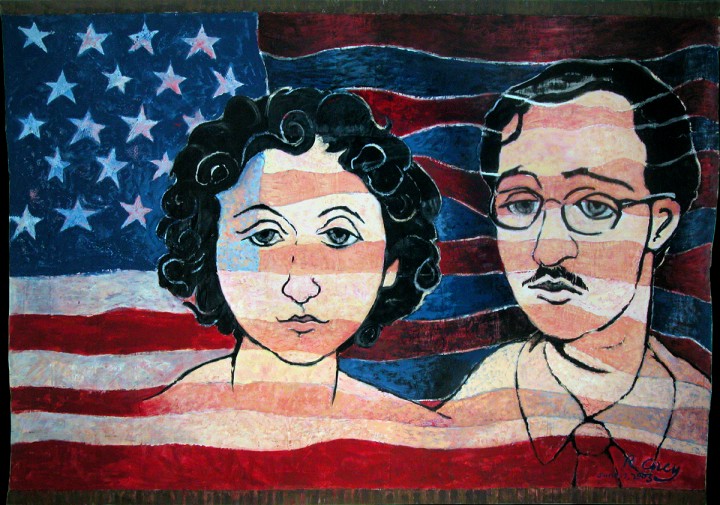 Today is the 68th anniversary of my grandparents’ execution. But since the start of the year I’ve been more focused on an anniversary we just passed: April 5th marked exactly 70 years since Judge Kaufman sentenced my grandparents to death. Many of you know the nightmare my father and uncle experienced after their parents’ arrest, conviction and execution but this recent milestone has me thinking about the more intangible consequences of the loss of my grandparents and so many others who resisted repression and are still resisting today.

Ethel and Julius never got the chance to see their sons fall in love, marry, and enjoy children and grandchildren of their own. My sister, cousins and I lost the opportunity to ask our grandmother what it was like to grow up in poverty in New York City’s Lower East Side as a Jewish girl who loved singing and acting. Or to ask our grandfather about being a student at City University of New York almost 100 years ago. And we were robbed of the chance to see how both our grandparents’ beliefs might have evolved as the world changed.

On the anniversary of my grandparents’ executions, I mourn not just their loss, but the infinite possibilities which died with them. But I take comfort in the knowledge that I am not alone. So many of you supported my grandparents then and stand with current activists now!  From Minneapolis to Chicago to North Carolina, we are marching not just in outrage over too many Black, brown and Indigenous people killed by cops, but also to mark the loss of who they might have been and what they might have accomplished. And to let their loved ones know that they are NOT alone in mourning these losses.

With your help, the RFC is making a real difference in the lives of children whose parents resist despite reprisals. We just awarded more than $205,000 in grants to provide the critical assistance these kids deserve, but we know we will receive even more requests this fall. We can’t meet this need without your support! Here are two examples of recent RFC grants:

Manuel and his older sisters Maria and Daycey miss their dad so much. After he was detained by ICE, he participated in multiple hunger strikes to protest his and others’ detention, fight for improved conditions and press for family reunification. Because of his participation, he was placed in solitary confinement in a "dry cell" with no running water, threatened with deportation, told he would not be eligible for release and taunted by prison guards. During his prolonged absence, his family has suffered tremendously. The three children are currently living in a shelter with their mom and hoping to see their daddy again soon. An RFC grant of $5250 will allow them to participate in safe, fun programs this summer while their mom works to find permanent housing and reunite her family.

Jake, Maggie and Marisol (ages three, six and 10) grew up with their dad’s activism and the resulting lost jobs and harassment which followed his human rights organizing. More recently, their mom, a Black activist, has been very focused on providing racial equity trainings to local educators.  Unfortunately, it has led to some interactions that have made both the kids and their mom feel unsafe in their small community. Both parents feel a responsibility to continue being active but recently they’ve had to make the hard choice to step back from some of their efforts as they try to balance the kids feeling seen in their full identities while prioritizing their personal safety and sense of security. The past year has been especially difficult for Maggie, she was just 18 months when she joined the family from foster care and the impact of her early childhood trauma is intense right now. Her parents have her in play therapy in addition to studying the ukulele. She loves music, and they are hoping she'll find it therapeutic. RFC grants of $4500 will cover music therapy, tutoring and childcare, providing needed stability and support for these three kids.

I get the most profound sense of personal satisfaction from providing this kind of aid to such deserving families, and I’m sure you will as well. I know that these kids have suffered and like you, I wish their nightmares had never happened. Times are hard and finances are tight, but can you think of anything you’d rather spend your money on than bringing solace to children like these?

Since 1990 we’ve awarded almost $8 million for therapy, sports, arts programs, summer camp, prison visits, and other support vital to creating new possibilities for these kids not just to survive, but to thrive. Your donations support the daughters and sons of brutalized anti-racist activists, targeted union organizers, fired teachers, detained immigrants’ rights activists, harassed journalists, imprisoned environmentalists and so many more.

Childhood memories can be painful, but I know that they can be transformed into a powerful, positive force. That’s why the Rosenberg Fund for Children makes grants that help alleviate the traumatic experiences of political repression by connecting kids to a nurturing community. This is your opportunity to embrace all of these children and assure them that they are not alone.

You know we will use your precious funds carefully. The RFC has been helping kids and youth like these efficiently and effectively for more than 30 years. I renew my pledge that 90% of every dollar you contribute in response to this letter will be awarded to children and activist youth like those described above and so many more.

On this anniversary of my grandparents’ executions, please consider making a special donation to support every child who, like me, knows the pain of imagining what might have been. We can’t undo the wrong that’s been done, but every extra dollar you give makes a tangible, positive difference in these children’s lives.