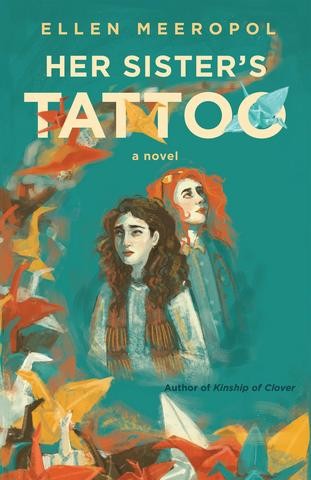 My wife’s fourth novel, Her Sister’s Tattoo, was published in April. It’s the story of Esther and Rosa, whose arrests during an anti-Vietnam War protest tear the sisters apart. It’s fiction, but it hits close to home.

Elli has said that she never intended to write a novel about the Rosenberg Case. Still, it is hard to miss the parallels between my parents’ case--in which my mother, Ethel’s younger brother David Greenglass’ trial testimony sent my mother to her death--and Elli’s story, in which one sister’s trial testimony against another sends the latter to prison. Of course, there are also important differences. In Her Sister’s Tattoo, no one gets executed, so the siblings must live with the consequences of their choices in the decades that follow.

It is not only the reminders of my parents’ case that makes this novel resonate with my life experience. Elli’s book is a multi-generational saga that imagines what would happen if the sisters split so completely that their daughters, born about the same time, would not even know about each other’s existence until they met at a left-wing summer camp when they were 12 years old.  When I read Elli’s first draft almost 20 years ago, I joked that it could be described as the Rosenberg Case meets “The Parent Trap.”

This also diverges from family history.  My brother and I have had virtually nothing to do with the Greenglass side of the family for almost 70 years. But the impact parents’ political actions have on their children and families, and the transmission of progressive values across generational fault lines, have been the central themes of my adult work life.

I founded the Rosenberg Fund for Children in 1990 as a public foundation that provides for the educational and emotional needs of the children of targeted activists and targeted activist youth in the United States. Some might pity these children as the collateral damage of their parents’ actions and government repression, but the RFC sees them as part of a beloved community of activism. We encircle these kids with the same kind of enriching cultural programs that helped me to survive my childhood nightmare. Esther and Rosa’s daughters could be RFC beneficiaries.

Directing an organization that has helped over a thousand children whose experiences, to a greater or lesser degree, echo my own was the most satisfying experience of my adult work life. Elli was central to every aspect of the RFC project, from the moment of its conception in 1990, to when she retired from its Board of Directors in 2013 when our daughter Jenn took over the leadership (and when three Meeropols on one Board seemed too many). The themes of Her Sister’s Tattoo reflect the pain and joy we have shared with hundreds of activist parents and their children as they navigated the narrow path between activism and parenting.

This book was 20 years in the making. Given our family history and life experience, I think Elli’s editor hit the nail on the head when she commented that this was the novel Elli was born to write. I hope you will agree.

You can order Her Sister’s Tattoo from your favorite indie bookstore or from Red Hen Press here.

I look forward to the blog.