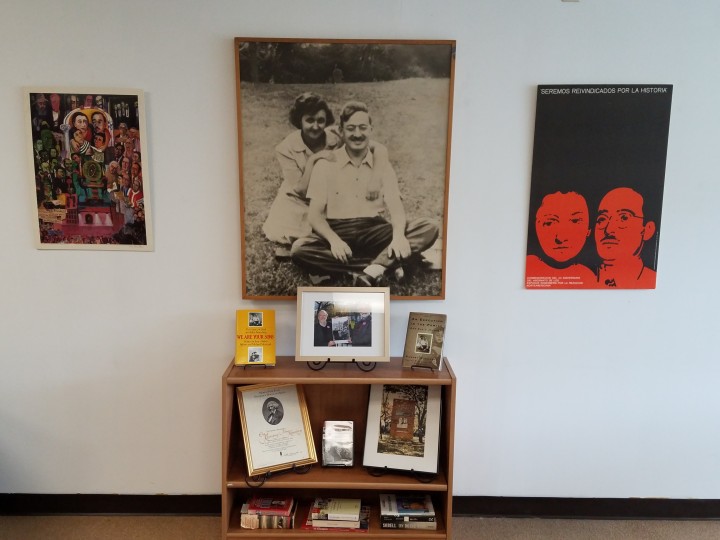 I’ve been thinking a lot about family in the lead up to the 66th anniversary of the execution of my grandparents, Ethel and Julius Rosenberg. In part, that’s because my first emotional connection to the case was trying to imagine what it was like for my dad and uncle when their parents were arrested, convicted, and executed. The passing of my aunt (my uncle’s wife Annie) last month reinforced this focus and made me reflect on something my dad and uncle have mentioned over the years: out of the destruction visited upon their family they deliberately re-created strong families as one of their first adult acts of resistance. They both married young, had children and—more than 50 years later—remain devoted husbands and fathers.

My dad started the RFC to carry forward the help that he received as a child, and today that vision lives on as we work to mitigate the negative impact on kids whose progressive parents experience repression—a lost job, arrest, harassment, injury, or worse—because of their activism.

By giving to the RFC, you show solidarity with these brave activists and ensure that they can continue their important work while together we support their children. And you also strengthen these families and our communities by allowing parents to continue their critical organizing while helping their children receive the tools and support needed to flourish despite attacks on their parents or, all too often, the entire family.

We need all our supporters to dig deep now. Your contribution allows us to continue to stand in solidarity with the children of harassed journalists, fired teachers, demonized reproductive rights leaders, targeted union organizers, brutalized anti-racist activists, imprisoned environmentalists and so many more. As requests continue to pour in at near-record rates, your support is more critical than ever. These are dark times but together we are making a difference for children at risk and activist families. Here are just a few recent examples:

Brothers Damon and Derek, ages two and 14, found their life upended when their father, a teacher and community organizer, was targeted after publicly advocating for a student who stood up for herself in response to a classmate’s racist comments. Their dad lost his teaching position, was blacklisted by the community and was flooded with hate mail and death threats. Vandals threw garbage on their lawn and broke the windows of their home, ultimately forcing them to move away. The kids have frequent nightmares, are without healthcare coverage and had to leave all of their belongings behind when they moved. RFC grants will allow them to attend a supportive daycare and provide educational support as they adapt to their new lives.

Two siblings, ages three and 16, whose mom chose to go public about her experience of being illegally stopped by a Customs and Border Patrol agent simply because she was speaking Spanish. She faced harassment online and in her hometown for daring to speak out about her experience. Both kids have also been targeted: Mateo was asked for his “papers” by a teacher at his high school and little Alexa’s preschool teacher told her she couldn’t speak Spanish in class. Music lessons and a computer will provide some fun for the kids during this difficult time.

This spring, we once again went thousands of dollars over budget and granted almost $200,000 to 80 families. This brings the total awarded by the RFC to more than $7 million. Over the next few months, our beneficiaries will use these funds to attend summer camps, take junior robotics classes, go horseback riding and more. Some will take driver’s education courses while others will learn to sail, play an instrument or visit parents or grandparents incarcerated for their activism.

Our assistance also lets these young people know they are part of a nurturing community like the one that so many people helped create for my father and uncle after their family was torn apart. That support was vital to those two little boys more than 60 years ago and the same is true for the children we assist today. As one mom recently shared, “My gratitude for the RFC is wide and deep. These last [several] years have been difficult on our family; I see some folks radiating great happiness and joy with newborns and toddlers and I shared those feelings, but I still feel sadness that the experience we had with our young child was in the context of escalated threats and targeting by nasty people. RFC reaching out and supporting us...restores my faith in humanity at a time when we sadly so often see the worst of people.”

Many of our beneficiary parents struggle to lessen the fear that lives in their children’s hearts while managing the pain of being limited in their own capacity to shield those children. All too often, they experience the outside world as a source of hatred and discrimination. I know that these kids have suffered, and like you, I wish their nightmares had never happened. We can’t change what they experienced but together we can help make things better for these children and their parents.

The RFC has been helping young people like these efficiently and effectively for almost 30 years, so you know we will use your precious funds carefully. I pledge that 90% of every dollar you contribute in response to this letter will be awarded to kids like those described above and so many more.

The positive impact our grants can have on families fighting for a better world is why we do this work. And just as our beneficiaries are grateful to us, we are immensely thankful to you. Your support makes our work possible.  Thank you for allowing us to honor our beneficiaries’ persistence, courage and faith in a better tomorrow. Please make a tax-deductible contribution to the RFC today and demonstrate your support for our beneficiary families. We must not let them stand alone!

I know you will be most generous.