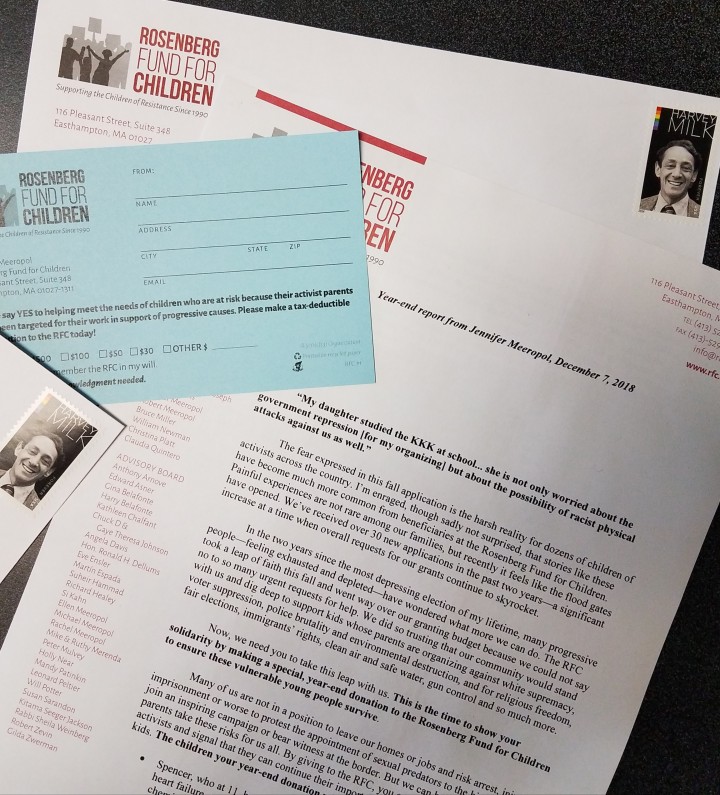 “My daughter studied the KKK at school... she is not only worried about the government repression [for my organizing] but about the possibility of racist physical attacks against us as well.”

The fear expressed in this fall application is the harsh reality for dozens of children of activists across the country. Painful experiences are not rare among our families, but recently it feels like the flood gates have opened. We’ve received over 30 new applications in the past two years—a significant increase at a time when overall requests for our grants continue to skyrocket.

In response, the RFC took a leap of faith this fall and went way over our granting budget because we could not say no to so many urgent pleas for help. We did so trusting that our community would dig deep to support kids whose parents are organizing against white supremacy, voter suppression, police brutality and environmental destruction, and for religious freedom, fair elections, immigrants’ rights, clean air and safe water, gun control and so much more.

Now, we need you to take this leap with us.

This is the time to show your solidarity by clicking here to make a special, year-end donation to the Rosenberg Fund for Children to ensure these vulnerable young people survive.

Many of us are not in a position to leave our homes or jobs and risk arrest, injury, imprisonment or worse to protest the appointment of sexual predators to the highest court, or join an inspiring campaign or bear witness at the border. But we can help the kids whose parents take these risks for us all. By giving to the RFC, you can stand with these brave activists and signal that they can continue their important work while we help comfort their kids.

The children your year-end donation will support right now include:

When we come together to support these activist families, we’re carrying on a long tradition of resistance that is very personal for me. After my grandparents, Ethel and Julius Rosenberg, were executed at the height of the McCarthy era Red Scare, my father and uncle survived in part because so many people stepped forward to protect them, despite the risks. We must be ready to give that same safe harbor to children of activists facing attacks today.

This is a frightening period in our nation’s history. It requires all of us to do more than what we might have thought possible only a short time ago. Many of the families we support have answered the call. Now, the rest of us must let them know we have their backs.

Please, give generously. And then consider giving a little more.