A Message from Ethel's Sons 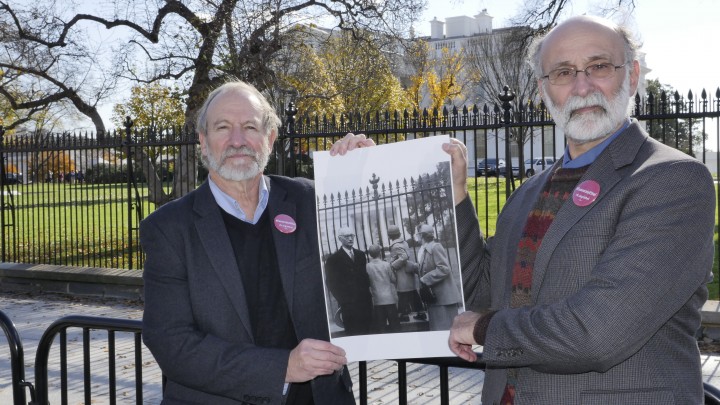 Like many of you, my family watched the clock tick down to the end of Barack Obama's presidency, hoping that in his final hours he would act to exonerate my grandmother, Ethel Rosenberg. Though that didn't happen, I hope you'll take a moment to read my father and uncle's thoughts below, about what this campaign did achieve.

I join them in being immensely moved and appreciative for all the support this effort received. Thank you SO much  ---  Jenn Meeropol, Executive Director

Statement of Michael and Robert Meeropol, sons of Ethel Rosenberg

In August 2015, The New York Times published our Op-Ed calling on President Obama to exonerate our mother, Ethel Rosenberg. It was a response to the release of government material a month before, showing the prime trial witness against our mother – her brother David Greenglass – repeatedly and adamantly stated under oath before the Grand Jury that he never spoke to our mother about espionage. That testimony, coupled with the enormous body of other independent evidence, made it clear that the government manipulated witnesses and created a false case against our mother, to put pressure on our father to cooperate in the politically motivated investigation of his actions.

The outpouring of support we received from our Times essay spurred us to forge ahead with an exoneration campaign. Its aim was to move the President to publicly declare that our mother’s conviction was unjust and her execution was wrongful, while also educating the public about the dangers of unchecked government power, especially in times of heightened concern about national security. Although we didn’t achieve the first goal, we were extremely successful with the second.

Some 60,000 concerned individuals added their names to our petition asking President Obama to act. Artists, activists, public intellectuals and elected officials were among the many, high profile people who supported our effort. A class of eighth graders in West Virginia championed the effort by gathering petition signatures and producing a video aimed at the President, about the parallels they saw between the play The Crucible and Ethel’s case.

The exoneration campaign was covered extensively and favorably by many of the most respected and far-reaching media outlets around the U.S. and internationally. These included 60 Minutes, NPR’s Morning Edition and Here and Now, and The Boston Globe.

With even Fox News publishing a report highlighting the grave miscarriage of justice in our mother’s case, it’s clear we succeeded in moving the needle on the public’s understanding of how the government wronged our mother, and why, dramatically.

We received thousands of moving and poignant communications from people who supported the effort. Many who contacted us have first-hand memories of our parents’ trial and execution. They described how their lives were forever affected by our parents’ case. They also recalled the fear and outrage they felt at that time, and are experiencing once again in our current political climate.

From the 90-year-olds who sent us shaky, handwritten letters, to the middle schoolers who posted about the campaign on social media, everyone who supported this effort demonstrated a deep commitment to holding our leaders accountable that we found inspiring. In their final letter to us just hours before their execution, our parents wrote that they, “were comforted in the sure knowledge that others would carry on after us.”

The campaign to exonerate Ethel Rosenberg has proved our parents correct in their belief that after they were gone, others would continue to resist repression and fight for justice. We consider that a victory.