One of my favorite parts of my job is receiving out-of-the-blue emails and letters from beneficiary families wanting to update us on their activism, their lives or their children. I received such an email a few days ago from an activist dad who shared a reflection his 19-year-old daughter, Moira, wrote about her recent alternative spring break trip.

Moira’s dad thanked us for the grants his children have received over the past few years and explained that the support, “significantly aids our resistance to injustice.” This father, who along with his wife is a long-standing peace and anti-war activist, faced charges of contributing to the delinquency of a minor and was labeled “an irresponsible parent” for bringing several of his children with him to a peaceful protest. I believe that Moira’s writing clearly demonstrates the excellent job her rightfully proud parents have done raising a young woman committed to a more just world. I’m happy to share her essay with you.

This year I decided to go on an alternative spring break trip with an organization that provides humanitarian aid to those struggling in the desert of the U.S./Mexico border. We camped in the desert and went on daily hikes to map out migrant trails and to leave water, food packs and socks in areas we knew migrants would be traveling. I walked on some of the same trails that people crossing the desert take. Although I never came across any migrants I saw many clues to where they had been. Empty food packages in Spanish, glass jars from used up candles, clothing and backpacks. Seeing these things often left me feeling hollow inside.

Some nights in the desert it got very cold and I woke up freezing in my tent. I felt guilty for feeling nervous about going on this trip when in comparison to what the migrants were facing my life is so cushioned. We had a campsite full of food and clean water, tents to sleep in and blankets and sleeping bags. I can only imagine how cold the nights are for migrants in the desert.

Our last day we attended an Operation Streamline Hearing. Operation Streamline is a policy that was put into place in 2005. While some people who are caught crossing the border are detained and then deported, others are chosen to be prosecuted in federal court in Operation Streamline.  Up to 70 people are processed at the same time usually within 2 or 3 hours. Although the migrants are appointed a lawyer, the lawyers only have about 20 minutes with each client. Virtually all of the migrants plead guilty to illegal entry and are sent to prison for a maximum of 6 months.

Attending Operation Streamline was really difficult.  All of the defendants were shackled around their legs, arms, and waists.  One man had gotten out of the hospital that day after spending over a week in the desert.  A defendant had lived in the United States for 14 years before he was deported. Another had his lawyer tell the judge that he has been crossing in order to find work to support his pregnant wife.  Each person had a chance to say some final words to the judge before they were sentenced. One man who has two United State’s Citizen children said, “I’m sorry for coming to this country but I came for my babies.”

Sitting there, unable to do anything, I felt so helpless. I wanted to stand up and yell at the judge. I wanted to say I was sorry to all of the people being convicted. I wanted to say something when the shackled migrants looked over at me. People desperate to support their families are not criminals and crossing an arbitrary border should not be a crime. This experience has encouraged me to be a voice for the voiceless. Every person should have the right to move in order to benefit their lives and the lives of their families. This is why I support humane immigration reform.

We need it NOW! 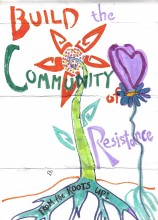