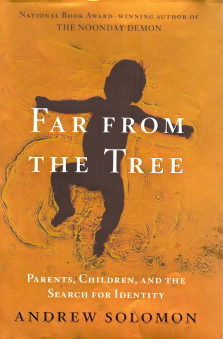 My book group almost exclusively reads fiction; usually political fiction, often written by women. In general, I prefer reading novels rather than non-fiction, so I was surprised by how moved I was by the first non-fiction book my group read this year: Far From the Tree: Parents, Children, and the Search for Identity by Andrew Solomon (http://andrewsolomon.com/books/far-from-the-tree/).

Far From the Tree is a meticulously researched study of identity and how parents deal with difference in their children in a multitude of seemly divergent forms, including deafness, Down Syndrome, dwarfism, prodigies, transgender and crime. Solomon spent a decade interviewing hundreds of families with “exceptional” children who fall into one of these categories.  One of Solomon’s main conclusions is “Different unites us. While each of these experiences can isolate those who are affected, together they compose an aggregate of millions whose struggles connect them profoundly. The exceptional is ubiquitous; to be entirely typical is the rare and lonely state,” (p 4).

While the stories of many of the families were compelling in their own right, and often moved me to tears, I was struck by how meaningful and validating Solomon’s conclusion is for the work of the RFC and especially our Gathering program (learn more about this program here). Our Gatherings bring together targeted activist parents and their school-age children, or the young adult children of targeted activists, for cultural workshops along with recreational and social activities. The programming facilitates the formation of bonds between Gathering participants who have experienced similar situations as a result of the activist parents’ work for social justice.

Despite these similarities, the targeting RFC families experience can often take different forms, and is a result of the parents’ involvement in disparate types of activism for an array of causes. The idea that parents, children and young adults can find common ground and build meaningful community despite these enormous differences (in country and language of origin, type of activism, severity of targeting, family structure, and religion, to name a few) is at the heart of our Gatherings.

Our most recent such event, held in 2011 for young adults, brought together beneficiaries from 13 states plus Puerto Rico. Their parents were involved in struggles to support domestic violence survivors, peace, immigrants' rights, environmental justice, independence for Puerto Rico, Black Panther political prisoners, women's rights, and other issues. While most of the participants’ parents were active in the U.S., families represented numerous countries of origin, including Cameroon, Chile, Guinea, and Zambia; the targeting was similarly diverse, including torture, imprisonment, loss of a job, harassment, or violence directed at the activist parents and their families.

Despite these differences, most participants focused on the connections and similarities they found with others as one of the most moving parts of their Gathering experience. Via surveys they told us:

As we plan the 2014 Family Gathering, we are committed to once again providing our beneficiaries the opportunity to meet others “whose struggles connect them profoundly.”