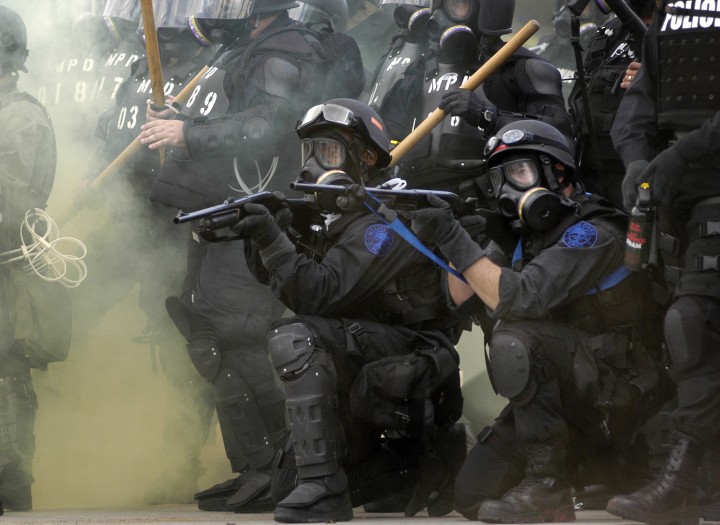 Monday I read a report that demonstrators in Burlington, Vermont (a left-oriented city that has sometimes been dubbed the People’s Republic of Burlington), were attacked by police in full riot gear using pepper spray and rubber bullets. The police responded that they do not carry rubber bullets, but “used pepper balls and stingball pellets” (North Country Public Radio, 7/30/12), a distinction that may be lost on those who were shot.

We’ve become all too familiar with visual images of phalanxes of police assaulting demonstrators while clad in armored riot gear and carrying an array of weaponry reminiscent of The Empire’s foot-soldiers in the Star Wars films. Whether on Wall Street, or downtown Oakland, CA last fall, or in Anaheim, CA just a few days ago, the nature of police response to public protest has become increasingly military.

The nationwide uniformity of such responses indicates to me that it’s not random. I believe this pattern of response is being planned at high levels of our government.

It can be argued that this kind of police response amounts to the United States government’s declaration of war on a portion of its population. The combined thrusts of the “war on crime” and the “war on drugs,” exacerbated by the post 9/11 “war on terrorism,” have fostered a martial mindset among those policing our cities and towns. Because military experience is considered a plus by those doing the hiring, a growing number of police recruits are veterans of the wars in Iraq and Afghanistan.

“Metropolitan police departments such as Dallas and Los Angeles actively recruit veterans, as do the Pennsylvania State Police, the U.S. Capitol Police and municipalities across the country,” (www.gijobs.com). These recruits have been primed by their experiences abroad and the training they receive at home to treat those they confront in demonstrations not as human beings exercising their rights, but as the enemy. “Shock and awe” has come home from Bagdad and echoes throughout our land. Add racism to this mix, and is it not so surprising that the Anaheim police would release attack–dogs on families of Latinos protesting police killing of civilians.

I can think of several possible reasons for a national policy of providing local police forces with increasingly lethal equipment and the ideological support for employing it within our borders. The first, as always, is to follow the money. I don’t have the numbers, but expect that “protecting” and arming our police is big business, funded largely by the tax-payers and benefiting the 1% at the top of the economic food-chain.

A broader reason is the need for more control as the gap between the rich and the poor expands. Social unrest is likely to increase as those at the top enjoy an increasing proportion of our national wealth, and their tightening grip over the country’s political machinery leaves those facing impoverishment little recourse but to take to the streets. Providing police with the physical means and psychological justification to repress a restive population may seem like a prudent course of action to authoritarian corporate powers.

What I’ve written above probably will surprise few of my readers, but recently I’ve considered another possibility for this ramped up level of police violence. The Obama administration’s apparent embrace of the continued militarization of the police may have less to do with its fear of domestic terrorism. Instead, it may reflect its concern about the social impact of climate-related catastrophes and resource depletion. Unlike those who dominated the Bush Presidency, many in the current administration are not climate change deniers. They may be planning for the approaching disasters, and foresee the necessity of increasing their ability to exert tighter control over the domestic population in response to food shortages, prolonged power outages and other disruptions brought about by global warming.

Whatever the reasons behind this alarming trend, it is incumbent upon all of us who believe in human rights and democracy to raise our voices in opposition. The militarized police pose a much greater threat to our freedom than the forces they are supposedly designed to protect us from.