Last week I made a quick trip to Southern California. My busy schedule did not permit me to see Hunger: In Bed With Roy Cohn, a new play that recently premiered in L.A. Yet while I was there, I was able to meet with the playwright, the producers and some of the actors after one of the performances.

The playwright, Joan Beber, is a distant cousin on my mother’s side of the family. I’d met her twin sister in Chicago several years ago. Joan wrote in her playbill notes: “I had no idea that my father was Ethel’s distant cousin and that he had risked his career to try to help her. His involvement was a closely held family secret.”

Joan told me that her father, an attorney who was well connected to major Republican politicians in his native Nebraska, engaged in a stealth campaign to have my mother’s death sentence commuted. Joan learned through her brother that their father had visited my mother in prison a few weeks before the executions took place. Neither of my parents ever mentioned this visit, and there is no evidence in the record that it occurred, so I can’t verify it. However, since her father was a relative he could have been allowed to see her.

Joan also said that after the visit her father used his political connections to convince Mamie Eisenhower to intervene with her husband, the President, to commute the sentence. Unfortunately, no one listened to Mamie, and the executions took place despite her efforts. While I have no way of confirming this story, it meshes well with a letter President Eisenhower wrote to his son explaining why he did not commute Ethel’s sentence: “It goes against the grain to avoid interfering in the case where a woman is to receive capital punishment. Over against this, however, must be placed one of two facts that have greater significance. The first of these is that in this instance it is the woman who is the strong and recalcitrant character, the man is the weak one. She has obviously been the leader in everything they did in the spy ring.”

Of course, we now know that my mother was not the leader, did not actively engage in any spying activity, and that the portrayal of my parents’ as having an unnatural “strong woman, weak man” relationship was concocted out of nothing to demonize them. I think it is most likely that the President was suckered into repeating lies presented to him as fact by underlings, rather than knowingly refusing to commute the death sentence of a woman he knew was not a spy… but we’ll never know for sure.

I’ve spent a lot of time over several decades trying to fit together who my parents were, what they did and what really happened in their legal case. It is like trying to assemble a multi-dimensional jigsaw puzzle without clear edge pieces. I’ve written here previously that many of the pieces have come together recently, revealing a much clearer picture than I had even a few years ago. After talking with Joan Beber last weekend I feel a couple more may have slipped into place. 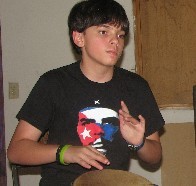