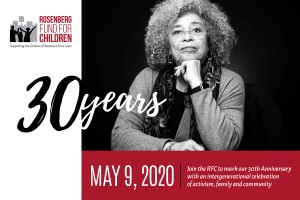 The RFC will mark our 30th anniversary with a festive celebration on May 9th, 2020, headlined by our Advisory Board member, Angela Y. Davis, at Gateway City Arts in Holyoke, MA. Poet Martín Espada (also an Advisory Board member), folk rockers The Nields, Robert and Jenn Meeropol, Board of Directors member José Ayerve, and former RFC grant recipients Leah Grady Sayvetz and Davíd Morales, will round out this very special evening honoring activism, resistance and the power of community, across generations.

Tickets are selling fast! Buy yours today at bitly.com/rfc30tix or by downloading a mail order form here. (All tickets will be held at the door.)

Guests are invited to mingle with RFC staff, board, and performers, and enjoy a cash bar following the program until 10:00 pm.

Parking is available on street, in nearby lots, and at the Proulx Municipal Parking Garage on Dwight St. (View parking map here.)

For pre-event, on-site dining info and other venue questions, visit Gateway City Arts or contact the venue at 413-650-2670 or hello@gatewaycityarts.com.

Seating is limited at this intimate event so early ticket purchase is recommended!

RFC Advisory Board member Angela Y. Davis is a scholar, activist, writer, and Distinguished Professor Emerita of History of Consciousness and Feminist Studies at UC Santa Cruz. Her work as an educator – both at the university level and in the larger public sphere – has always emphasized the importance of building communities of struggle for economic, racial, and gender justice. Having helped to popularize the notion of a “prison industrial complex,” she now urges her audiences to think seriously about the future possibility of a world without prisons and to help forge a 21st century abolitionist movement.

Leah Grady Sayvetz and Davíd Morales are former RFC grant recipients and have been peer mentors for younger RFC grantees.

Leah lives in Ithaca, NY, where she grew up in the Catholic Worker Community which follows Dorothy Day's call to follow the works of mercy and resist the works of war. Her education took place in courtrooms supporting civil resisters, at the White House, Department of Energy, Pentagon, and School of the Americas to protest US imperialism, making protest art and puppetry in the streets, visiting her mom in Federal prison during a six-month sentence for protesting the Iraq War, and in the garden growing food to share with neighbors in her low-income neighborhood. As an adult, Leah has carried on her connection to the land and to her family's tradition of activism, participating in a wide range of movements for justice.

Davíd lives in his hometown of San Diego, CA. As a teenager he was banned from his high school graduation after organizing against the militarization of his school and the marginalization of working class students of color. He’s now an educator in the same district, teaching, culture, language, critical thinking, and rebellion (via 9th and 12th grade Spanish), while continuing to be active with immigrants’ rights work, and organizations like Project YANO (Youth and Non-Military Opportunities) and Colectivo Zapatista.

RFC Advisory Board member Martín Espada has published more than twenty books as a poet, editor, essayist and translator. His many honors include the Ruth Lilly Poetry Prize, the Shelley Memorial Award, the Robert Creeley Award, the National Hispanic Cultural Center Literary Award, an American Book Award, an Academy of American Poets Fellowship, the PEN/Revson Fellowship and a Guggenheim Fellowship. His book The Republic of Poetry was a finalist for the Pulitzer Prize. A former tenant lawyer in Greater Boston’s Latinx community, Espada is a professor of English at the University of Massachusetts-Amherst.

Western MA-based folk rockers The Nields (sisters Nerissa and Katryna) have been lighting up the indie circuit with their sibling harmonies and generous and warm performance style, since 1991. They’ve produced 20 albums, scored major and independent record and publishing deals, and shared the stage with 10,000 Maniacs, The Band, James Taylor, and the Indigo Girls, among many others. Their latest album, November­­, tackles issues including the climate crisis, the situation at the border, and the fragility of our democracy with messages of hope that pulse like a strong and steady heartbeat.