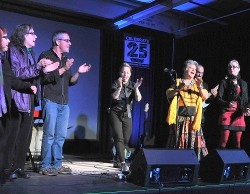 This past October, 300 members of the RFC community from around the country - donors, beneficiaries, Board, staff, and volunteers - gathered in the RFC’s home town of Easthampton, MA to celebrate 25 years of our work supporting the children of resistance. The event (made possible thanks to the generous support of The Puffin Foundation) celebrated “Artists as Activists,” and the transformative power of art that has been part of both the RFC’s history and that of the Rosenberg/Meeropol family.

The evening’s program, which was preceded by a reception for Anniversary Circle supporters, consisted of three elements: a short film (see below), a round-table discussion, and a concert. The film included interviews with RFC founder Robert Meeropol, western MA-based artists Pamela Means and The Nields, and RFC Advisory Board members Angela Davis, Holly Near, Chuck D of Public Enemy, Mike + Ruthy and Peter Mulvey. The participants reflected on art’s role in social movements, why they feel compelled to use their platforms to work for justice, and what moved them to connect with the RFC. Following the film, RFC Executive Director Jenn Meeropol took the stage with musician and playwright, Erin McKeown; author, RFC Advisory Board member (and Jenn’s mom) Ellen Meeropol; and actor/director/producer and newest member of our Advisory Board, Gina Belafonte, daughter of Harry Belafonte. With Jenn moderating, Ellen, Erin and Gina reflected on their motivations for incorporating activism into their work; the challenges and rewards of creating political art; and the artists who have inspired them. The event wrapped up with a joyful concert by Erin, opened by A Besere Velt (A Better World), the Boston Workmen’s Circle Community Chorus. However, the conclusion of the evening’s festivities did not mark the end of the RFC’s focus on “Artists as Activists.” In 2016 and beyond, we intend to produce a variety of our own programming involving activist artists.

We also will be exploring collaborations with like-minded organizations such as Sankofa.org, the group co-directed by Gina Belafonte and Raoul Roach (son of Max Roach), that is dedicated to encouraging artists to use their visibility and platforms to further movements for social justice.