MONTCLAIR — Less than a week ago, 11-year-old Katie Murphy was proudly receiving multiple awards at her 5th-grade graduation. Now, no one in her Montclair neighborhood knows what happened to Katie and her younger sister, Lisa, who were last seen in the company of the FBI after their parents were arrested Sunday night as Russian agents...

In the past century in the U.S. , there have been just a handful of cases involving both parents’ simultaneous arrest for spying. The most notorious involves Robert and Michael Rosenberg, who were just 6 and 10 in 1953 when their parents, Ethel and Julius, became the only Americans executed as Russian spies. More than 50 years later, Robert Meeropol — his adopted name — is director of the Rosenberg Fund for Children, a non-profit organization that supports the offspring of imprisoned dissidents. Although he is currently abroad and not available for comment, Meeropol discusses what it feels like to be the child in this situation on the fund’s website...

Read the rest at http://www.nj.com/news/index.ssf/2010/06/accused_russian_spies_children_nightmare.html

ROBERT MEEROPOL talks about the 20th anniversary of the Rosenberg Fund for Children and reports on new info on the Rosenberg case in the new book Exoneration by Emily and David Alman.

"Where Are They Now? Michael and Robert Meeropol"

Except for vague impressions of living in a tiny apartment with a warm and loving family, Robert Meeropol remembers very little about his parents, Julius and Ethel Rosenberg, sentenced to death 59 years ago today for passing atomic bomb secrets to the Soviets.

Meeropol, who was 3 when his parents were arrested, says his first real memories of his parents were of the times he visited them in prison. Rather than being traumatic, those visits were comforting, he recalls.

The Rosenbergs’ impending executions prompted protests worldwide. Robert, then 6, and his brother Michael, 10, also demonstrated with their grandmother at the White House just days before their parents were put to death in the electric chair in the summer of 1953...(read the rest of the story at the link below).

Ethel and Julius Rosenberg are shown in 1951, during their trial for espionage in New York City.

PROVIDENCE — “Julius Rosenberg was involved in something illegal — no one is claiming he was totally innocent — but he was not stealing atomic secrets.”

That was the view of Robert Meeropol in an interview Tuesday. His parents, Julius and Ethel Rosenberg, were executed in 1953 after being found guilty of espionage for passing information to the Soviet Union about the landmark U.S. effort to create nuclear weapons in World War II.

Now, there is a new documentary film that Meeropol said will shed some light on the case...(read more at the link below)

Orphaned By The State

Orphaned by the state

Ethel and Julius Rosenberg were executed by the US government as Soviet spies. Their younger son Robert - now in his 60s and surprisingly upbeat - tells Joanna Moorhead that the best revenge is to have lived a good life... (read more at the link below)

The younger son of Ethel and Julius Rosenberg came face to face with an uncomfortable revelation recently: that his father was guilty of spying for the Soviet Union. Both Ethel and Julius Rosenberg were executed for conspiracy to pass atomic secrets to the Soviets in 1953. And for most of his life Robert Meeropol believed his parents were not spies...(listen to the interview at the link below) 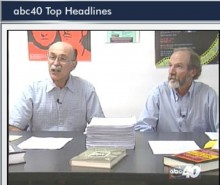 EASTHAMPTON, Mass (abc40) - Robert and Michael Meeropol live quiet lives in Western Massachusetts, but they have an extraordinary story to tell. Their parents were executed, convicted of giving the secret of the atomic bomb to the Soviets during World War II. The brothers have always maintained their parents' case was unfair. Now they say the have the proof...(more at the link below)

The transcript shows that Ethel Rosenberg was willing to tell the grand jury that she was 34 years old and that she lived at 10 Monroe St. in New York City with her husband, Julius.

She was willing to tell the jurors, in words made poignant by the knowledge of what came later, that she had two children, ages 7 and 3. But beyond that she would say nothing, even as the questions flew at her... (read more at the link below)

For Rosenberg Sons, Full Story of Case Still Out of Reach

To some, an old man's admission this month about Soviet-era spying closes the book on one of the most divisive cases in American legal history.

But two Valley men who've lived this story for a half century- since their parents' execution June 19, 1953 - continue to believe the full story cannot yet be written...(read more here) 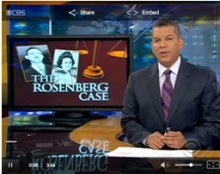 Questions from the trial of Ethel and Julius Rosenberg, the only Americans ever to be executed for espionage in peacetime, may finally be answered. Russ Mitchell reports...(view the video at the link below)