Son of Julius and Ethel Rosenberg: "My Parents Were Executed Under the Unconstitutional Espionage Act—Here’s Why We Must Fight to Protect Julian Assange"

December 30, 2010- As the Justice Department considers charging WikiLeaks founder Julian Assange under the Espionage Act of 1917, we speak with Robert Meeropol, the son of Julius and Ethel Rosenberg—the only U.S. citizens to be executed under the Espionage Act in what’s been described as the most controversial death sentence in U.S. history. This week, Meeropol released a widely read statement in support of WikiLeaks called "My Parents Were Executed Under the Unconstitutional Espionage Act—Here’s Why We Must Fight to Protect Julian Assange." [includes rush transcript–partial]...watch and/or listen to the interview at the link above.

The Espionage Act is a huge danger to our open society; it's been used to send hundreds of dissenters to jail just for voicing their opinions, transforming dissent into treason.

Rumors are swirling that the United States is preparing to indict Wikileaks leader Julian Assange for conspiring to violate the Espionage Act of 1917. The modern version of that act states among many, many other things that: “Whoever, for the purpose of obtaining information respecting the national defense with intent or reason to believe that the information is to be used to the injury of the United States” causes the disclosure or publication of this material, could be subject to massive criminal penalties. It also states that: “If two or more persons conspire to violate any of the foregoing provisions … each of the parties to such conspiracy shall be subject to the punishment provided for the offense which is the object of such conspiracy.” (18 U.S. Code, Chapter 37, Section 793.)

I view the Espionage Act of 1917 as a lifelong nemesis. My parents were charged, tried and ultimately executed after being indicted for Conspiracy to Commit Espionage under that act...

Though this article originated on this website's blog, here, where it has many comments, to read the AlterNet republication and its comments follow the link above. 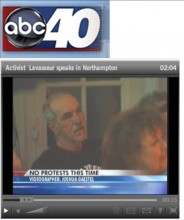 Raymond Luc Levasseur was a militant activist who was acquitted of sedition during a trial in Springfield in the 1980s. He was convicted on other charges stemming from the Ohio seven's bombing of public buildings in the 1980s. He served 20 years in federal prison.

On Sunday, Levasseur was in Northampton not to talk about his activism, but rather the impact it had on his children. He also spoke about how the Rosenberg fund for children helped.

See the video at the link above...

On its 20-year anniversary, the fund held a celebration. It has raised and spent an average of $350,000 a year for counseling, music lessons, soccer camps and countless other things for children whose parents have been imprisoned or otherwise targeted for their progressive politics.

Read the rest of the story at the link above...

Ray Lavasseur [sic], who spent 20 years in prison for a series of bombings in Boston will headline the event this Sunday.

When Lavasseur was invited to speak at UMass Amherst in 2009, police officers protested. Ultimately, Lavasseur was prevented from visiting because of probation issues.

The Rosenburg Children’s Fund provides money for education, cultural opportunities and counseling for children of activists.

Watch the video at the link above...

NORTHAMPTON – The last time convicted bomber Raymond Luc Levasseur was scheduled as part of a panel at the University of Massachusetts, the planned event drew protests and media attention.

Ultimately, he did not speak because a parole commission in Maine denied him permission to travel.

On Sunday, he is scheduled to speak at the Northampton Center for Arts to celebrate the 20th anniversary of the Rosenberg Fund for Children. So far, his visit is not causing a peep.

Read the rest at the link above...

AMHERST, MA (wfcr) - Ray Levasseur -- a former radical political activist -- is making his first appearance in Western Massachusetts since 1989, when he was tried for sedition in Springfield as part of the "Ohio 7". Although those charges were dropped, he served 20 years in federal prison as a leader of the "United Freedom Front", an underground organization that protested apartheid in South Africa and U.S. involvement in Central America. The group was held responsible for a series of bombings and the killing of a New Jersey state trooper. Levasseur almost returned to Massachusetts last year, but his invitation to speak at UMass-Amherst was rescinded. He spoke recently with WFCR's Karen Brown. © Copyright 2010, wfcr

Listen to the audio file at the link above...

Just over 20 years ago, Robert Meeropol, then an unfulfilled corporate lawyer in Springfield, figured out what he wanted to do with his life: he started the Rosenberg Fund for Children (RFC) in honor of his parents, Ethel and Julius Rosenberg. A concert at John M. Greene Hall in Northampton, featuring Pete Seeger, Richie Havens, Country Joe McDonald and Jane Sapp, launched the RFC on Oct. 12, 1990.

Two decades later, the RFC assists hundreds of children across the country every year, and has awarded almost $4 million since its beginning. But while this project sprang from one man's history and vision, and flourished because of the steadfast support of many people, including hundreds in the Pioneer Valley, one group deserves special recognition.

The RFC is not a project fueled primarily by wealthy people and relying on a "trophy" board of directors to bring home the metaphorical bacon. Instead thousands of people across the country and even abroad support the project with modest contributions. None have made greater contributions than the 36 local individuals who have served on the RFC's all-volunteer board of directors.

Particular kudos should go to four individuals whose service has been Herculean. Board members Elli Meeropol, Bruce Miller, Bill Newman and its chairman, Bob Winston, all have given two decades of their time and energy by serving in these roles from day one. The board is a working one - they make decisions about the organization's grants and policies, but they also provide a wide range of expert services including translation; legal and financial advising; event planning; leading arts workshops and counseling beneficiaries at gatherings attended by grantees; and rolling up their sleeves to work at every, single RFC event around the country for 20 years.

This level of commitment and service to community is rare. On behalf of RFC supporters, beneficiaries and staff, we thank them.

Amber Black is the public relations and technology coordinator for the Rosenberg Fund for Children.
Daily Hampshire Gazette © 2010 All rights reserved

Last year, when Ray Luc Levasseur was invited to speak on the University of Massachusetts — Amherst campus to commemorate the anniversary of a federal sedition trial held in Springfield, the speech prompted vehement protests from police groups and state officials.

Two decades earlier, Levasseur had represented himself against federal prosecutors and won acquittal in that sedition case. Subsequent trials on different charges saw Levasseur convicted of involvement with the United Freedom Front, a radical group that waged an underground revolutionary campaign between 1975 and 1984. (The UFF bombed several targets in New England, including Boston's Suffolk County Courthouse in April 1976.) Levasseur served two decades in jail before being paroled to Maine, his home state, in 2004. Ultimately, it was parole restrictions that prevented him from speaking at UMass.

Since then, Levasseur, a self-described radical activist and former political prisoner, has been released from federal parole. He returns to the Commonwealth this month to speak at the Rosenberg Fund for Children's Anniversary Gala, in Northampton, on October 17. Robert Meeropol, the son of Julius and Ethel Rosenberg, established the Rosenberg Fund For Children in 1990 to assist the children and families of American activists and political prisoners. Levasseur said that his speech will focus on personal experiences of his that would help illuminate the Rosenberg Fund's mission, such as, "How the (Rosenberg) fund helped my kids out, and the issue of activism and raising a family. How all this comes to bear. The consequences of it, and the issues people have to deal with, and why activists do have children, despite the obstacles and hardships they sometimes face."

Read the rest of this in-depth interview at the link above...

The Price of Activism

Activists who abandon normal lives to serve political and social causes suffer in many ways. They may lose their lives; they may go to prison; they may have trouble making ends meet and keeping their families together. Their suffering is the stuff books are made of.

But what happens to their children?

Against a background of controversial activism that reaches to militancy, even alleged espionage, the welfare and the destinies of activists' children will be the theme of the Rosenberg Fund for Children's 20th anniversary gala on October 17. Ray Luc Levasseur of the Ohio Seven, a militant activist acquitted of sedition in Springfield but convicted on other charges stemming from his group's bombing of public buildings in the 1980s, will speak about the government's dealings with his children and those of his associates in the group after they were arrested in the late '80s.

Read the rest of the story at the link above...