NBC News and My Different Take on the Case of the Cuban Five
12.06.2012
Michael Isikoff Cuban Five Amnesty International 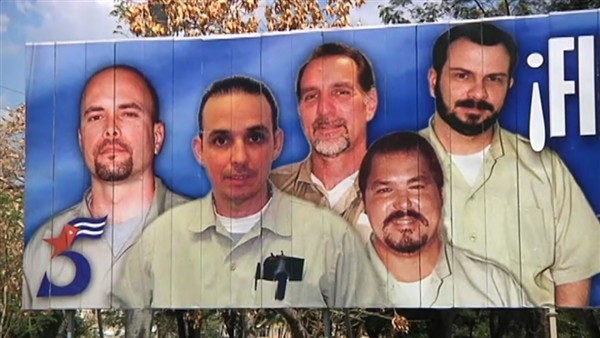 Under the headline, "Cuba pushes swap: its spies jailed in US for American contractor held in Havana," NBC News reporter Michael Isikoff wrote on December 3rd, “It seems straight out of a Cold War spy movie.  A group of Cuban undercover agents sneak into the U.S. and set up a secret pro-Castro network in south Florida – receiving instructions in code through late night radio transmissions from handlers in Havana.  But the FBI gets wind, tails the agents, intercepts their messages and busts them, sending the agents off to federal prison, their ringleader for life.”

That’s not how I view it, but first I will address another aspect of the case I find personally compelling.   I wrote in 2006 that 8-year-old Ivette, the daughter of one of “The Cuban 5,” René González, had never been allowed to visit her father in prison because our government had declared that her mother could not accompany her because her mother posed a “security risk.”  Given what happened to Elian Gonzalez when he arrived in Miami without a parent, it was understandable that Ivette’s mother would not let her daughter travel to the United States without her. That meant that Ivette, born after René’s arrest, had never seen her father.

I explained further, “I know from personal experience how important it is for children to visit their incarcerated parents.  My only memories of my parents, Ethel and Julius Rosenberg, are of my prison visits to them when I was a small child.  It is vital to Ivette’s development that she see her father.  The Board of Directors of the Rosenberg Fund for Children has already indicated its willingness to fund travel expenses within the United States for visits by Ivette and other children of the Cuban 5 through its Attica Fund Prison Visit Program, but no visits will happen until the United States Department of Immigration and Naturalization is pressured into permitting them.”

Under the Geneva Conventions and other international standards, denying prisoners the right to see their families was and remains a form of torture.  Unfortunately, the NBC article did not address this important human rights issue, and the picture it painted of the legal issues it did address was distorted.  To recap:  The Cuban 5 - Gerardo Hernández, Ramón Labañino, Antonio Guerrero, Fernando González and René González - have been imprisoned since 1998.  They were convicted of conspiracy to commit espionage.  Four were originally sentenced to life and one to 75 years

Yes, “The 5” were agents of the Cuban government, but they were not committing espionage against the United States.  Instead, they were monitoring Cuban exiles in South Florida.  Yes, the FBI caught them, but their mission was not to set up a pro-Castro network in Florida but rather to prevent Cuban exile groups from committing terrorist acts in Cuba.   They were working to protect the Cuban public.  Apparently terrorism committed against the United States is unacceptable, but is okay if aimed at Cuba.

Isikoff’s story continues that Cuba is seeking to exchange “The 5,” now held for over 14 years, for an American he described as a “contractor” imprisoned by Cuba for three years after he was convicted of subversion.  According to Isikoff, the Obama administration claims the contractor’s imprisonment “is not comparable in any way to that of the five Cuban agents,” because among other things the Cubans received “due process.”

Once again the Obama Administration has a curious understanding of what constitutes due process.  In the Cuban 5 case, the trial, held in the rabidly anti-Castro Miami, was a kangaroo court and the outcome was entirely predictable.  That is why, on July 27th 2011, Amnesty International issued a report which noted its serious concerns about the fairness of the Cuban Five’s trial, questioned the validity of the evidence against them, and criticized the defense lawyers’ lack of access to all the evidence.  Finally, the report concluded that the entire process was flawed and the punishment disproportionate.

While the Isikoff article quotes imprisoned Cuban 5 leader, Gerardo Hernandez’s, claims that the trial was unfair, the author apparently feels that a report by Amnesty, an expert neutral observer, is not worthy of mention.

Justice demands that the Cuban 5 should have been reunited with their families in Cuba long ago.  It is most unfortunate that the best prospect for their release today is for Cuba to offer to exchange imprisoned Alan Gross, a citizen of the United States.

In the words of Gerardo Hernandez:  “I understand [Gross’] sufferings and that of his family…. If an agreement can be reached, to stop the sufferings of six families, then I welcome it.”   Amen.

Let them all be reunited with their families & we will call it a day.