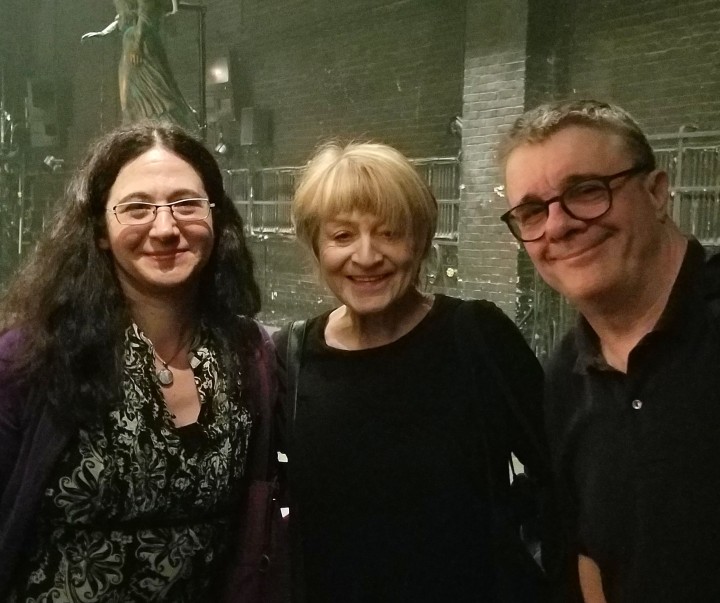 Last week Angels in America closed after a triumphant, award-winning revival on Broadway, more than a quarter century after it first took the theater world by storm. During Angels’ first Broadway run, I was in college and deliberately avoided the press or any discussion about the play. I was writing my thesis, which explored the frames of meaning—historical, legal, cultural, etc.—in my  grandparents’ case with a focus on how they impacted the representation and understanding of my grandmother. While it would have made sense for me to read the play or see it performed, especially since Ethel Rosenberg has a prominent role, something kept me from doing so.

Part of my reluctance had to do with how immersed I already was in the case from writing my thesis. I read the 1000+ page trial transcript along with my dad and uncle’s book, We Are Your Sons, and my grandparents’ prison correspondence. I also interviewed numerous people with first hand connections to my grandparents, including Ethel’s therapist and one of the founders of the committee to save them. But all of that felt somehow less immediate than seeing an actress play my grandmother on stage.

In addition, I’ve always been especially affected by visuals. I can tolerate (and often enjoy) scary, disturbing novels but I’m incredibly squeamish about TV shows and movies. My parents still joke about the time they took me to see Puff the Magic Dragon as a child and we had to leave in the middle of the show because I was a sobbing, terrified mess wailing about the scary “big lizard.”

Looking back, I think I was already living enough in the case to not want additional images in my head. Maybe that’s why I didn’t watch the movie version of Angels in 2003. I didn’t have HBO but I could have found a way to see it if I wanted to, and I’m a big fan of Meryl Streep, Mary Louis Parker and other cast members.

I might have missed this Broadway run of Angels in America as well if my co-workers hadn’t encouraged me to see it. The combination of the glowing reviews, wide-spread publicity, the RFC’s ongoing “Artists as Activists” programming and their own interest in seeing the play, led them to suggest that we take an office field trip to view it.

I’m so glad we made the effort. I was apprehensive about seeing Angels for the first time in a crowded public theater. I really don’t like crying in front of strangers and I thought there was a good chance I would be emotionally overwhelmed by the experience. I was moved to tears by several sections of the play, especially the scene where Susan Brown, the wonderful actress who played Ethel, sang the mourner’s Kaddish (the Hebrew prayer for the dead) over Roy Cohn in an act of mercy. But I don’t think I was any more overcome by the play than anyone else experiencing Tony’s Kushner remarkable, eight hour epic that day.

What I hadn’t anticipated was what a gift it would be to see my grandmother brought to life on a stage as she might have appeared if she had lived past her late 30s. I realized that while I’ve read a lot of fiction and nonfiction about the case and seen actors read Ethel’s letters, I’ve never seen a live portrayal of her in full costume.

To see a living version of an older, more “grandmotherly” Ethel was emotionally powerful. And, thanks to the generosity of the cast and the production staff, I was able to go back stage after the performance and meet several cast members including Susan Brown and Nathan Lane, who expertly portrayed the despicable Roy Cohn. After more than eight emotionally draining hours of theater, I felt tongue-tied and barely coherent, but everyone was gracious and welcoming. It was an amazing experience and a perfect example of the power of activist art.

This article about Ethel Rosenberg by her granddaughter

I so appreciated seeing this. I'm sure Tony Kushner would be happy as well. I was unable to see this production, unfortunately, so I'm particularly glad to read this.

Thank you for sharing your experience. As a preteen Jewish kid in a leftist family, when your grandparents were
put through their ordeal, I was much affected and very frightened as I read the daily papers. It affected my family and they dropped long friendships and moved away. Nothing was explained to me at the time. I saw Angels in America on TV and was very moved by the sequences including Ethel and the acting and costuming for that. I also find your experience with the play very moving and I am glad you finally could see it.

Sandra, I identify with much

Sandra, I identify with much that you said in your note, and appreciate your comments.
Thank you for your blog, Jennifer,

It gave me chills to read

It gave me chills to read this. Thank you

Your beautiful thoughts about Angels' moved me--well--to tears. I am so glad you saw and found that it was a precious experience about your precious grandmother.

I also just recently saw Tony Kushner's "Angels in America" in Berkeley, CA. As the wife of a victim of HUAC in the late 1950's in Buffalo, N.Y., I could relate the scenes involving Roy Cohen and your grandmother. I cried at times and laughed also at the portrayal of Roy Cohen and Ethel Rosenberg. Her singing of a familiar Yiddish song and the Kaddish moved me most. But I also laughed at how Ethel tried to get under the skin of Roy Cohen. For me those were the best parts of the play.

Great Essay, despicable Roy Cohn is correct! Angels in America is honestly one of the best written plays I have ever seen. The reality of the characters, the personal drama they experienced/ endured and the Criminally deplorable Ronald Reagan era political climate that ignored and forgot them, is truly very frightening and heart warming at the same time. The character of Ethel Rosenberg adds a tragic and touching truth to the entire emotional landscape of the show. This speaks directly to the talent that went into every aspect of this particularly timeless show, writers, actors, directors etc.....simply AMAZING!!!

may her name be cleared someday. she was a courageous woman, much admired by me. Glad you were able to see "her" in this production.

Like an earlier poster I was a preteen and was affected and scared. I didn't know what was going on but I knew it wasn't right.
I've seen Angels twice, seen part one of the TV production, and read the play more times than I can recall. The
Kaddish scene never fails to move me no matter how often I'm exposed to it. And the way in which Ethel gets Louis through the recitation and then adds that amazing extra line ... I don't think I've ever seen or read a greater illustration of .. I'm not even sure what to call it... humaneness, perhaps. Who knows what your grandmother would do .. but I can think of no better character to write that scene for than her.

I wish I could express the full depth of my gratitude for this post and all of your generous and courageous work. I'm a 73 year old descendant of a long line of Jewish Socialists. I can't remember a time when I didn't know your grandparents' story. I always felt that they were members of my own family. In many ways they were and are. I've been a theatre-maker all my adult life. I co-founded and worked with "Traveling Jewish Theatre" from 1978 until our final closing in 2012. Based in the SF Bay Area, I met Tony K. around 1989 when our local Eureka Theatre Company (led by Oskar Eustis and Tony Taccone) presented the very first readings of "Angels." I was thrilled to see Ethel (which was my mother's name as well) so beautifully written and played. So happy you finally got to see it and write so movingly about it.

loved this read from Jenn...this case was dear to our hearts and still is.....not forgetting!

In the early 1940s, when I was 10 years old I would accompany my mother Sadie Pontosof Lorenzo shopping from 272 Delancey St. going north on Sherrif St. We would occasionally stop to "say hello" to your grandmother Ethel Rosenberg. I remember having to wait and wait while they talked and talked.

As a teenager and as a young man I signed petitions to "Save the Rosebergs". At age 20 I enlisted in the USAF and when back in New York City I further signed petitions. I would recently learn from your organization how this held up my obtaining a Top Secret Security Clearance for several years.

What I did was right - what Roy Cohn and Joseph McCarthy did was wrong.

paragraph 3 of blog - your youthful fear of movies and theater

I forwarded this lovely piece to my 25 year old daughter - who screamed and cried as a child at Shari Lewis and Lambchop and Big Apple Circus shows, forcing us to flee the theater in each case - and told her to take note of the 3rd paragraph. Her response was "Puff the Magic Dragon IS scary".

Thank you, clearly your daughter & I are on the same wave-length. My mom corrected me that it was actually Pete's Dragon that I left in tears; I'm sure I would have found Puff the Magic Dragon terrifying too :).

And thank you to everyone for the lovely comments and feedback on this blog, I really appreciate them all.

Thank you, Jenn, I was not aware of the play, but this prompted me to get the DVD's of the series with Al Pacino and Meryl Streep. I was amazed by the powerful acting and, of course, the drama itself.
I bought copies of the DVD's for different friends in England and France. Part of everyone's duty to keep the Rosenberg flame burning.