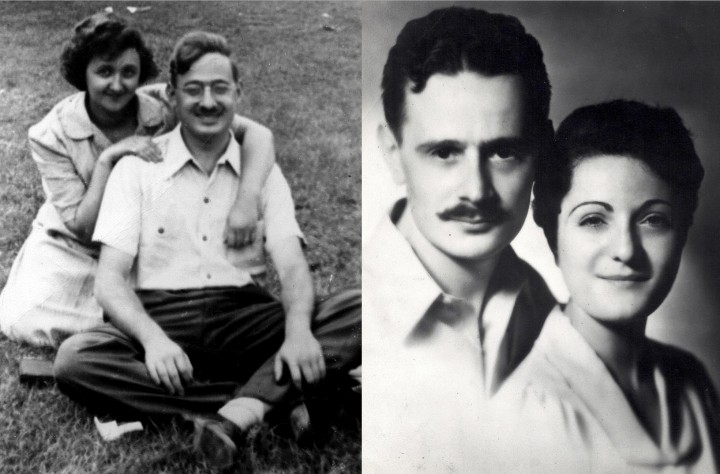 On this 64th anniversary of the execution of my grandparents, I’m struck by a related milestone that passed without fanfare a few months ago: the 60th anniversary of my dad and uncle’s adoption by Anne and Abel Meeropol. Taken together, these events capture the spirit of the Rosenberg Fund for Children. My father founded the RFC to honor his birth parents’ resistance and to repay the community which allowed him and his older brother to flourish despite the devastation visited on their family. Anne and Abel were a vital part of that network and the sense of love, security and creativity they provided was in many ways the model for the RFC.

When you support the RFC, you honor Ethel and Julius Rosenberg’s activism and Anne and Abel Meeropol’s commitment to the children of resistance. Your donations make our grants possible and allow us to stand in solidarity with the children of harassed journalists, fired teachers, targeted union organizers, brutalized anti-racist activists, imprisoned environmentalists and so many more.

The RFC has already awarded over $190,000 this year. That brings the total granted in our history to close to $6.5 million! These are dark times and we know our aid will be critical in the days to come, so we are committed to being there for these kids. But we need all our supporters to dig deep now. More children are at risk and activist families are counting on us. Here are a few examples of the positive impacts of our recent grants:

Thirteen-year-old Tommy’s (not his real name) adoptive mom leads a community organization that challenges environmental racism in their small southern town. They’re fighting a landfill that borders a historic black cemetery and is the site of a former slave plantation. After filing a lawsuit and organizing in the community and online, the company approached Tommy’s mom and other leaders with a settlement “offer” (which included the demand that they dismiss the complaint and allow the company to review their emails and text messages). When they declined, they were named as defendants in a $40 million defamation lawsuit! The family is also dealing with attacks on Tommy at school, where staff include city officials his mom has criticized for their stances on key community issues. A $1500 grant for a computer for Tommy will aid his education, easing the burden on this family while they fight the looming lawsuit.

When they were younger, Jayden and Natasha’s mom was a key organizer in the effort to stop the execution of Troy Davis. They were scared and confused when police officers began to show up in front of their school and at their mom’s work. It got so bad that their mother’s boss warned her that it was not safe for the family to stay in the area; they fled to another state, where their mother became active with the effort to free Marissa Alexander. After the campaign gained national attention, their mom once again faced harassment, arrest and ongoing surveillance from local officials. It took a heavy toll on the family and they relocated again to escape the constant stress and anxiety. RFC grants totaling $4000 will provide educational support for these siblings, now teenagers, as they struggle to adjust to yet another move.

Many of our grantees’ stories are tragic, but they’re also inspiring. Confederate flags fly, mosques burn, Jewish Community Centers face bomb threats and LGBTQ rights are being attacked from all sides. Millions of valued members of our communities face the threat of deportation, loss of health care and violence at the hand of police or vigilantes. But we’re not silent in the face of this repression; we’re marching in the streets en masse in defense of women and immigrants, science and the environment, victims of police brutality, and workers and LGBTQ members of our community.

My grandparents lost their lives due to the anti-communist hysteria of the 1950s. Today, our beneficiary families are at just as much risk. So many of you have organized, sacrificed, and come together to fight repression in the past and we must do so again. By giving to the RFC, you can stand in solidarity with these brave activists and signal that they can continue their important work while together we help protect their children.

With your support, the RFC is making a real difference in the lives of these kids and others whose parents resist despite reprisals. Our grants fund therapy, sports and arts programs, summer camp, prison visits, and other vital assistance that allow these children not just to survive but to thrive. Our assistance also lets these young people know they are part of a nurturing community like the one that Anne and Abel created for my father and uncle after their family was torn apart.

The RFC has been helping young people like these efficiently and effectively for more than 25 years, so you know we will use your precious funds carefully. I pledge that 90% of every dollar you contribute in response to this letter will be awarded to kids like those described above and so many more.

In honor of Ethel and Julius and Anne and Abel, please show these families that you support them by making a tax-deductible contribution to the RFC today. We must not let them stand alone!

Do We Really HAVE "Freedom?"

First, my condolences to your entire family on this sad day. As I read your blog, and I see that people, who speak up, are being unfairly harassed, and are victims of humiliation, and worse, I wonder if we, as Americans really have "freedom." I hear a lot of people talking about how American is great, because we value freedom, and such. Well, how much freedom can one have, if one takes up a cause, and then is a victim of death threats, and lawsuits, and be forced to move from your home, like the two families in your example. While I agree that "freedom comes at a price," I think being forced to move from your home is way too high a price. What I am afraid of, is that we are seeing a phenomena of "Freedom at gunpoint," as "you agree with me, or else." It doesn't really matter what side of the aisle it is, but I am seeing a ton of this type of thing with the rise of now-President Donald Trump. I don't know if you follow sports, but free agent NFL QB Colin Kaepernick is being blackballed by NFL teams, because last season, he kneeled, and refused to stand for the National Anthem to protest police brutality, as a member of the San Francisco 49ers, as NFL teams are afraid of this loud, small minority group of fans, who will make a huge fuss. The fact that less accomplished free agent QBs like Mike Glennon, and others, have gotten jobs, and Kaepernick took the 49ers to a Super Bowl only 4 Seasons ago, and had a very good 4:1 Touchdown to Interception ratio last year, tells you, that he is politically being blackballed, but the NFL Commissioner Roger Goodell,who railroaded the NFL's top star into a 4 game suspension over PSI in a few footballs last year, denies that Kaepernick is being blackballed. I am frightened that the atmosphere that produced your Grandparents' execution will repeat itself.